Well, we made it! We did it! We conquered it! We have successfully hiked the Grand Canyon, Rim to Rim. It was a wonderful experience, and I'm already excited to go back. Let's just jump into the play by play.

Brady, Sarah, and I woke early in Williams and headed to the Grand Canyon (or GC for short). After getting to the Bright Angel Lodge on the South Rim, we got our first look at the canyon. It's easy to forget the awe you feel when seeing the GC in person. We looked down and could see our camp for the last night, Indian Garden. 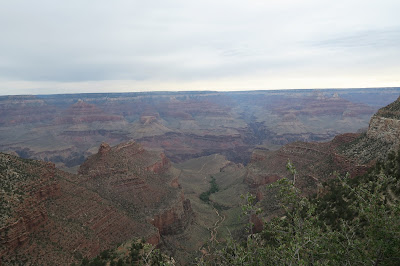 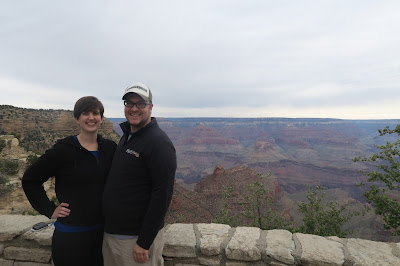 We got on the shuttle that would take us to the North Rim and rode along with a bunch of guys from Wisconsin that had finished hiking rim to rim the day before. They were nice and kind of funny, Brady hated them. We called one guy the "Quarter Master" because when we were on the South Rim, he offered Sarah a quarter to use the telescope. We're always on a lookout for Sarah's man.

After a 5 hour drive and about a 1/2 hour before getting to the North Rim, it started to rain, then snow! Thick, snow. "Dread' is a word that came to us, I think. The WI guys were all, "Our hike started like this, it's not that bad". And we said, "You're from WISCONSIN!" So we were getting nervous, Brady was getting sad, then once we entered the park, the snow just disappeared. It was still raining a little and it was cold, but we felt optimistic.

We began our hike in the pine trees. I had no idea the GC was surrounded by forest on the North Side. Then the trees opened up and we got our first glimpse of the North Rim. It was such a different looking canyon than the popular South Rim, I like it a lot.

We hiked down feeling good, it rained enough that the ponchos came on for about an hour or so. We soon realized that Cottonwood camp, out first stop, was further than we anticipated. Twice, we got fooled into thinking we could see it, but we saw other trail stops instead. I broke down in tears once or twice. The down hill walk is murder on the legs, and I felt really weak by the end. Brady was very encouraging and we finally made it about 30 minutes before dark. We quickly ate our yummy freeze dried meals and went to bed. 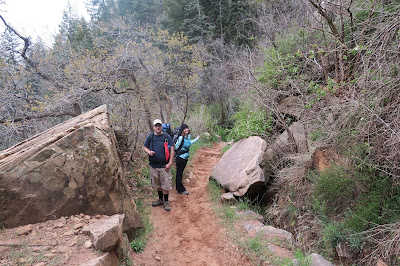 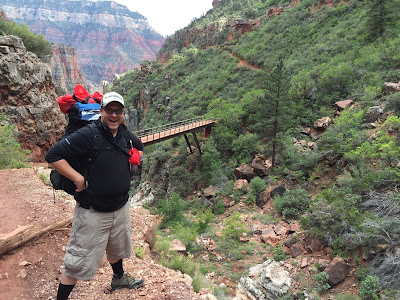 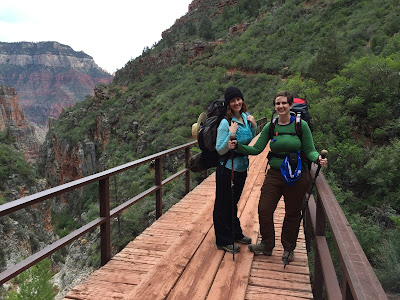 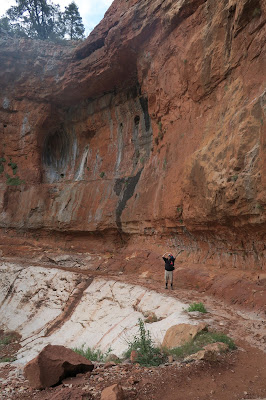 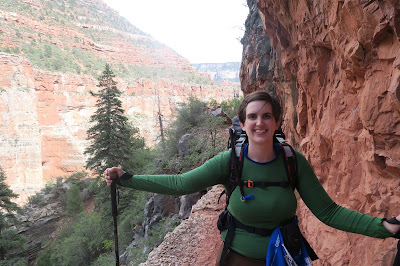 Feeling better after some rest, although not much sleep because of the cold, we got up and hiked out by 7am. This day's hike was much easier and flatter, 1500 feet in elevation change, I think, opposed to 4000 ft. Most of the time we were right next to the river, which I think was Bright Angel Creek. A lot of people passed us by and we leap frogged a couple of groups but generally, we were the slow hikers on the trail. Brady struggled the most this day. He didn't get much sleep and his shoulders hurt from his pack. 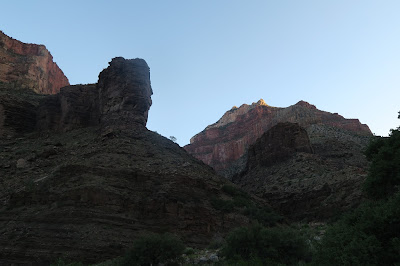 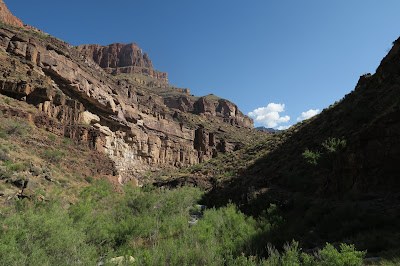 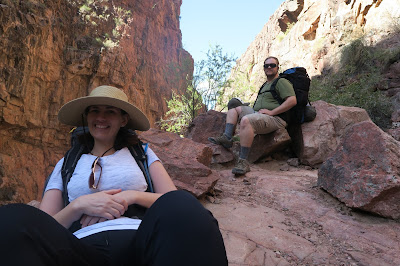 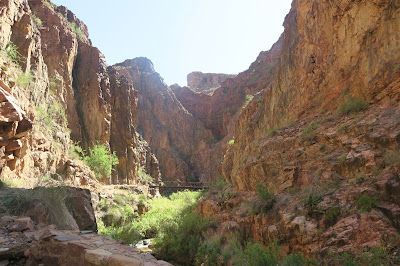 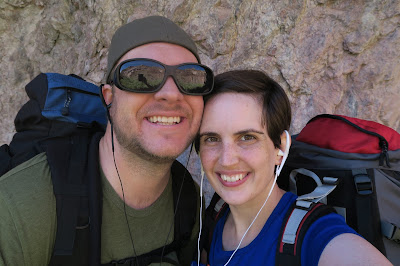 We stopped to eat lunch at 10:30 and started up again at 11. Lunch always rejuvenates us. Very soon after we came across a sign that said "3/4 mile to Bright Angel Campground". We were amazed we had gone 6.9 miles already. We entered Phantom Ranch first. It was very busy. Hikers everywhere. I was pretty tired and just wanted to get to our campsite. We finally got one and I took my pack off so fast! The toilets weren't working by the campgrounds, which was a bummer. After a little rest. We walked up to Phantom Ranch to check out the store. It wasn't much of a store but we bought postcards so we can mail them to the boys, by mule! (We beat the postcards home by a day). We hung out sitting in real chairs in the lodge for about a 1/2 hour and used the flushing toilets there, which would also later break. We filled our camelbaks at Phantom Ranch before dinner, since the water was turned off at the campgrounds at the time. By the time we were done eating, the water and toilets by us were working again. Thank goodness! We were all pretty tired and went into our tents by 7:30, it was still light out. I was asleep by 8. Everyone slept pretty good this night, except when rolling over. My body was super stiff and achy.

My favorite day. We began our hike at 6:30am. It was our first uphill day. It wasn't too bad since we only went up 1200 ft, but it gave us a taste for the last day. The very beginning of the hike is crossing the Colorado River. It was really cool and pretty good size. My pictures don't do it justice. 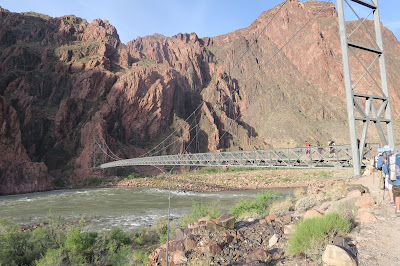 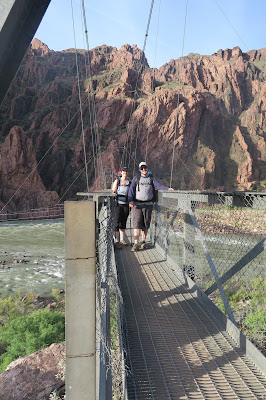 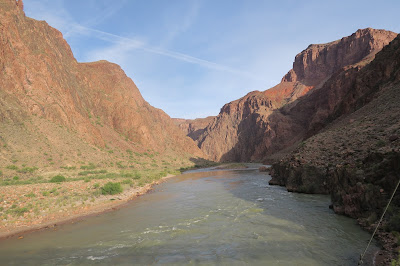 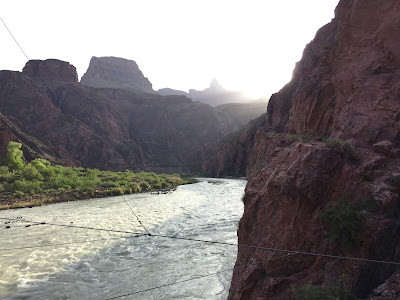 The trail was a little busy, people were going up and down likes it was nothing, especially the crazy trail runners. Sarah went ahead of us and Brady and I stopped for more breaks and a lunch and got to Indian Garden around 10:30am. Not to bad! 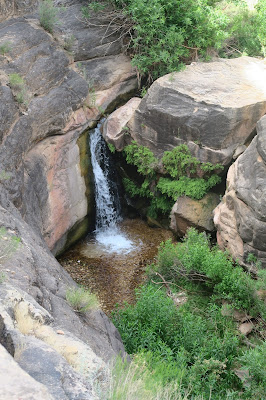 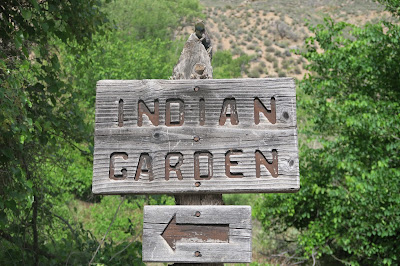 The campground was beautiful and the toilets were super clean. The camp really is an oasis in the desert. We could see straight up to where we would be hiking the next day, which was a little nerve-wracking. From Indian Garden, there's a trail to Plateau Point. I had wanted to do it to see the view of the river since it's only 3 miles round trip, but I decided to just rest. Sarah went on her own and got pictures for us. 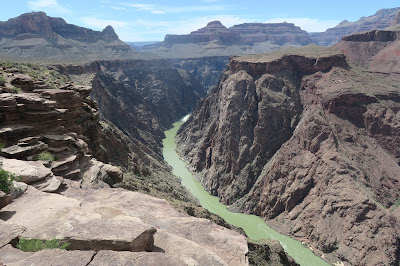 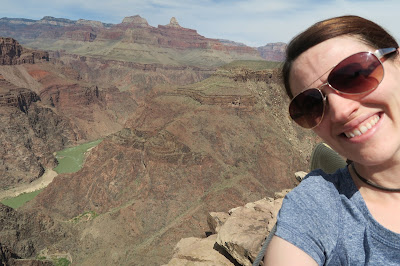 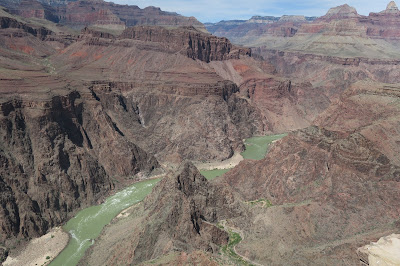 There was a box at the campground that's filled with books that you can take out and read. I looked to see what they had and lo and behold, they had a book called "Death in the Grand Canyon". This was something, since our dad has a story in this book. Kind of. He was caught in a flash flood like 25 years ago and the story of the exact instance was written about in the book. So we were pretty excited to find that. Luckily nobody dies in that story. But that book was not fun to read while you are still in the bottom of the canyon. *shudders*

After dinner, we played a card game then went to bed. I didn't sleep too well that night, although it wasn't cold, the wind was blowing really hard.

We were up and ready and hiking at 6am. I think we were all anxious. It was 4.5 miles total. What was nice is that there was a rest house every 1.5 miles. This days hike was straight up the canyon wall, over 3000 ft up. The first 1/3 of the hike, to the "3-Mile Rest House" went ok and we made in 1 1/2 hours. The elevation was the most difficult part at that point, it's difficult to catch your breath in thinner air. It was getting more busy on the trail from the day hikers. Everyone is running down past us as we were slowly panting up hill. 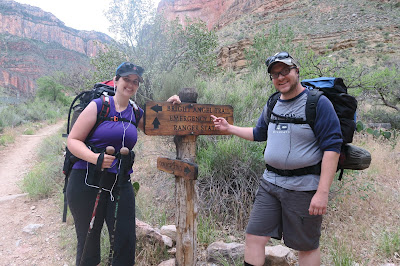 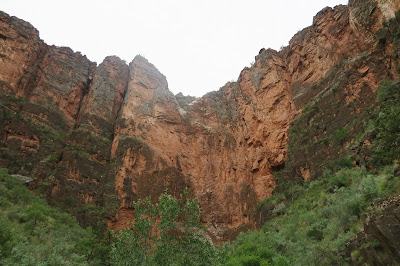 It was a bit of a struggle to the next rest house. But we made it in only 1 1/2 hours. We sat down to eat lunch for a half hour. Another hiker coming from a river trip says to us, "You know you're close to the end when you see more denim and sweatshirts." This made us laugh. It's nice to feel that camaraderie with other back-country hikers. The day hikers were very nice and were full of questions when seeing three sweaty people with huge packs on their backs.


Next was the last leg. The first bit of it was "Jacobs Ladder" or as Brady called it, "The Devil's Intestines". We stopped a lot, and I would look down to see how far up we've come, it was better than looking up to see how far we had left.

The last mile seemed to take forever. We kept resting every 10 minutes to catch our breath. It was getting colder and the air was thinner, which didn't help. But we finally reached the top. 4 1/2 hours total from when we started from camp. Sarah and I got choked up a bit. We definitely felt like we accomplished something. 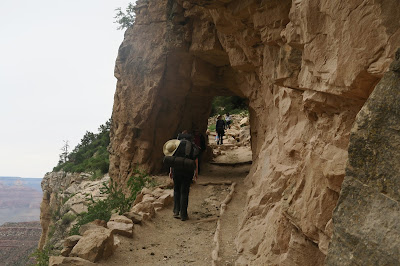 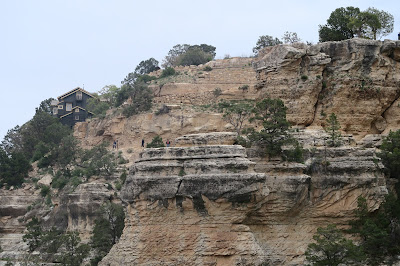 We were happy to take the packs off. After getting our deserved souvenirs and saying hello to some Bright Angel Camp neighbors we had, we headed to McDonalds for "real food". Then home. I was very happy to see our boys and was glad they enjoyed their time with their grandmothers.

This was an adventure for the books. Our dad was supposed to join us but his new job didn't allow that since he had only started a month before. But it's just another excuse to go back so we can go with him, since he inspired us to go in the first place. I'm happy to have gone with my two best friends and would go again in a heartbeat with these two. 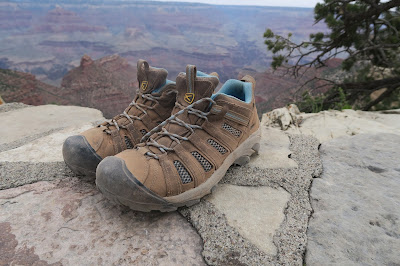