What a good weekend

I should begin by explaining what leads up to the weekend. The most stressful 2 weeks of my life. (not really, but you get my level of anxiety) I was somehow put in charge of organizing/running our ward bbq. (yeah, me?) Well, I was first just on the committee to help out, then I was asked to be the co-chair, then my co-chair moved! The good thing was that most of the organizing and assignments were given out by then. But panic mode kicks in when my trust issues put me in denial that nobody will do what's asked of them. Brady kept assuring me that everything will be fine, but I just cried a lot.

Turns out, it was great! Everyone did their assignment. There was enough food, a good turn out, and people seemed to enjoy it. So call me relieved.

So that was Friday, I was stressed that day. Brady had to go into work at noon, very very early for him, so I had tons of food to load and deliver to the church by myself, as well as set up while managing Ollie. But like I said before, everyone came through in the ward, I had tons of help, than expected, and everything got done. The best part was Brady getting off work at 6, and making it to the bbq just as it was starting.

That would also mark the first time Brady and I had a Friday night together since he started his job in September. It was wonderful.

After a very lazy Saturday morning we went to see The Hunger Games with our friends Brian and Katharine. No line too!! I enjoyed the movie very much, which was a relief, since I loved the book. Brady didn't like the amount of shaky cam and the makeup done on the Capitol citizens, which I get.

Today is Sunday, and church was good. Oliver behaved, and didn't need to be taken out at all during the first two meetings.

Now we're going to have some dinner at Sarah's house!

The weekend isn't over yet since Brady doesn't go into work again until tomorrow night. Yay!

Posted by The Gillmans! at 9:27 PM No comments: 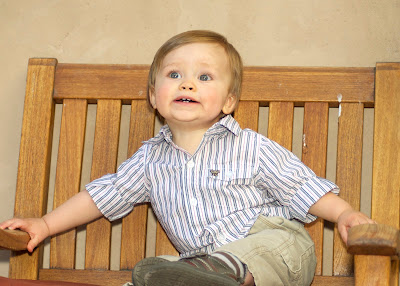 So I realized I haven't blogged about Oliver in a while. As in, tell about what he does, interests, tricks, quirks. He's changing so much every day so I need to record some stuff.

As you can see in the top picture, he makes faces. He started doing the strained smile randomly a few weeks ago, it always makes us laugh.

He loves when we jump out of nowhere to scare him. He always screams.

He now gives hugs and kisses.

When he hugs, he squeezes our shoulders and does the hand tapping thing. It's a sweet feeling.

We're teaching him how to throw a ball and he's kind of starting to get it.

He's taller than most kids a few months older than him.

Loves technology and only wants to play with stuff related to it.

Favorite shows: "The Cat in the Hat, Knows A Lot about That" and "Sesame Street's Elmo's World". Sometimes he gets sucked into "Super Why".

He does not care for "Curious George", book or TV show, which is fine, because it's not my favorite either.

Still likes "Yo Gabba Gabba", but only the parts with the Gabbaland characters. No music videos for him.

He loves the opening credits to "Parks and Recreation".

Expert whiner and begs for food.

He's starting to open doors, like the raptors in Jurassic Park.

Tries climbing on the couch all the time but only gets up on his own about 25% of the time.

He carries his favorite blanket around in his mouth, no hands required.

After a 3+ month break, he finally has more teeth coming in.

Now here are some pictures from our picnic on Friday at Kiwanis Park. 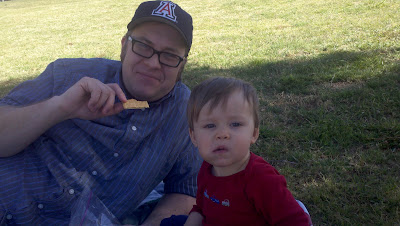 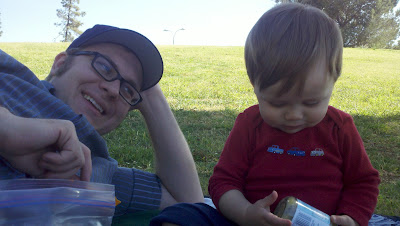 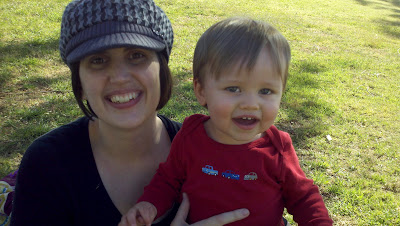 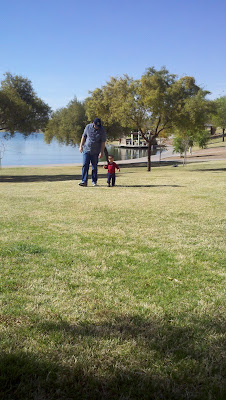 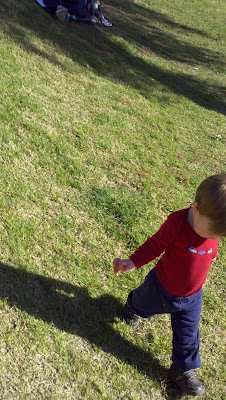 It's no secret that my mom loves being a grandma. So when she volunteered to take Oliver for a couple of days during her spring break, we had to say yes.

But what do we do with no baby and little money?

Go out to eat at Chipotle (no high chair required).

Walk around Ikea and plan our homes future.

Read in our creepily quiet home.

Go to church and pay attention. So glad we got to do that, lots of good lessons.

Make some plans with the Hubs.

Realize we really love having Ollie around. It's much too quiet and not as much fun without him.

Posted by The Gillmans! at 8:07 PM No comments:

I've been struggling with the decision to cut Oliver's hair which has gotten slightly out of control. On Saturday, I gave in and cut it off. Not all of it; he looks so good with longer hair. I refused to use clippers that most people do with their baby boys because it's easier. I actually used scissors. 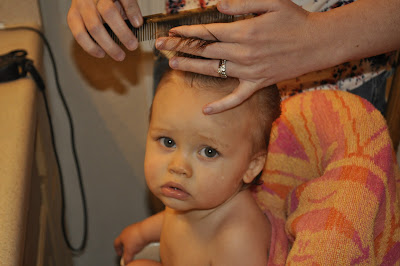 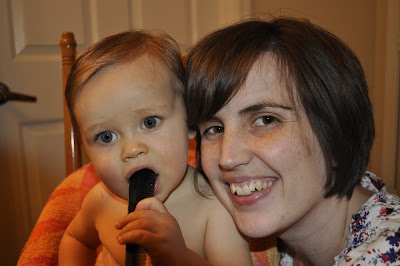