I just wanted to put up some pictures from the trip to Safford for Grandma's birthday.

I found the camera cord! Actually Brady found it for me.

On Grandma's 80th birthday, my mom and I (and Ollie) went down to Safford to surprise her with our presence, and her big gift. This year, her daughters gave her a "girls day out". Nails, shopping, dinner, and a Broadway show, "South Pacific". The "girls" also included any daughter-in-laws and  granddaughters that decided to join. It was fun. Now for some pictures, family can steal the pictures if you'd like. 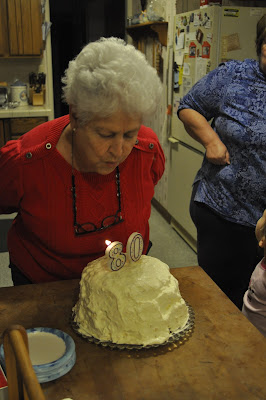 About 2 weeks later everyone headed to Mesa for the big day. We started with nails, then shopping.

It seemed that everyone had a wedding to shop for, so it was a full day of shopping at Superstition Springs. Afterwards we had an early dinner where the men joined us at the Cheesecake Factory.

After dinner and a quick clothing change, we left the guys again and went to see "South Pacific" at ASU Gammage. I didn't get any pictures of us since we were in a hurry, but let me tell you, Grandma was excited.  It was kind of funny. She loves musicals so this was a perfect end of the night. I also thoroughly enjoyed the show although I don't really like the movie. There was a french guy in this show that none of us could understand, and he was one of the stars! Awesome.

Happy Birthday Grandma! You're the greatest! We love you!
Posted by The Gillmans! at 2:36 PM 1 comment:

So I sat down to blog about Grandma Bingham's 80th birthday. However, I can not for the life of me find my camera cord that has mysteriously disappeared. So that will come hopefully tomorrow. So on to other things. 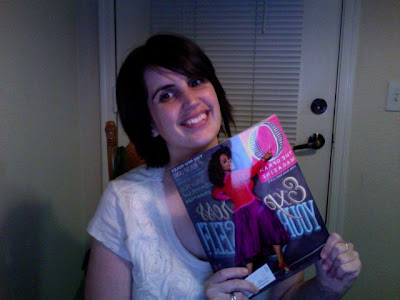 I've subscribed to O Magazine. (It was an impulse buy, near the register.) I got a super cheap offer and thought, "why not?" It'll give me something to read during the down moments that don't last long enough to read a chapter in the book I'm reading.
*note to mom: you can have my old copies when I'm done with them.*

In more fun related news. Brady's brother, Riley, is getting married next month to Susan. They asked me to design their wedding invites. They knew that I had designed mine and Brady's and liked that idea. Susan told me that she liked "vintage chic" and lots of pictures. So this is what I came up with.
(click on the picture to see them larger.)

It was fun to work on this, I liked having a project to work on, and it made me realize that I really miss doing photoshop work. I'll have to dabble in that a little more.

In stupid news. Brady and I had an interesting Sunday. A few weeks ago, the Bishop had warned us that there was to be the Rock n Roll marathon in Phoenix in a few weeks, and it will make getting to church a little difficult. He had said that he will give more info about it the next week. Well, Brady and I was either sick or in the hall with Oliver whenever that info was delivered and we suffered for it.

We set off to go to church, on time, I might add, and were immediately road blocked. We were sent in the opposite direction we needed to go and every time we tried to get in the right direction, we were sent some where else. We ended up in downtown Scottsdale. Not anywhere near where we needed to be. Then in the attempt to bypass the marathon from the north side, we got stuck on the same road until we reached the 51, again, not anywhere near where we wanted. By then, I finally got the genius idea to text Julie, who is in our ward and ask how to get there. Luckily she texts during church. ;) Apparently, it was super simple and we could've been at church right on time, instead, we were an hour late!

After church, we tried going back the way we came. But that was not successful. We tried about 4 different routes before throwing in the towel and just going to eat lunch at IHOP to wait it out. Frustrating! But it was a good laugh too. We honestly could not believe how stupid we felt not being able to get anywhere. I really hope we weren't the only clueless ones. I'm sure we could've made it home easily if we knew back roads and neighborhoods. But we don't. Oh well, made for a good memory. The End!
Posted by The Gillmans! at 9:08 PM 1 comment:

I am obsessed with this show.

Downton Abbey is about an aristocratic family in England and their house staff. I may love the house staff more because they are more relatable to me, but it's all so good.

I watched all of season 1 on Netflix between Wednesday and Sunday. I finished in time for the season 2 premiere Sunday night.

I had heard many good things about this show and finally decided to give it a try, and I was immediately hooked. It's totally riveting, with good story and good characters, those you love, and love to hate. Even Brady, who only watched an hour of season 1 with me and the season 2 premiere, said it was a good show, and "not boring".

I highly recommend it.

I should take pictures of New Years celebrations sometime, but it didn't happen again this year. Brian and Katharine came over and we hung out eating delicious food, watching a movie, playing games and ringing in the New Year. Oliver loved them, and refused to go to bed and miss out on the fun. He stayed up until 10:30pm. That's 3 hours past his bed time. But Brady and I had fun and loved having our friends company.

It's now 2012. So, like everyone else I'm thinking about how this year is going to be better than last. That's what I've noticed from Facebook statuses, (I dislike Facebook most times. It's such a downer.) Anyways, here's what I have been thinking about:

2011 was a very challenging year for myself and for Brady and I together. We faced three huge challenges this year, but there were always blessings to come from it.

Unemployment: This started in 2010, but it didn't end until just this September. Brady applied to tons and tons of jobs and we didn't see a lot of promise until this summer. This made things difficult for us financially and emotionally. But after all the prayers, priesthood blessings, and persistence, Brady was able to get a job in his field and even right here in Phoenix. He really enjoys his job and he even has plenty of time to do his New Vintage Film freelance work. Other blessings to come out of this was that we were able to learn to live on a single income, communicate our feelings better, and Brady was able to stay home with Oliver and became an amazing father in the process while I worked.

New home: This was difficult for me to accept at first but once we got moved, we fell in love with this change. After being in a ward that was challenging for us to feel comfortable, we ended up in an amazing ward with fantastic people, that we never want to leave.

A Baby During Unemployment: Oliver has been the biggest change and blessing in our lives. Having him during unemployment brings a set of challenges. Having to leave Oliver at home while I went to work everyday was really hard. The blessing to come out of this was Brady was able to become an amazing father and he understands the difficulties of being a stay at home parent. I also was able to become closer to my co-workers and even became friends with them which made being away from home a hundred times easier.

I'm looking forward to this year. We have no big plans, except the movies we want to see (Hunger Games, Batman, The Hobbit) and celebrating Ollie's 1st birthday.

I'm watching TV while writing this so I hope this post is good.

So here's to the unknown!!
Posted by The Gillmans! at 7:57 PM No comments: