I hope everyone had a good Christmas. We had a great time here at home with lots of family and food.

I always said that Ollie would be walking by Christmas, and I was right! December 23, 2011 marks the big day that he officially became a walker.

He's been getting better and better everyday.

Christmas Eve we hung out with mom and Sarah eating our traditional Mexican food and then we went to the temple to see the lights. 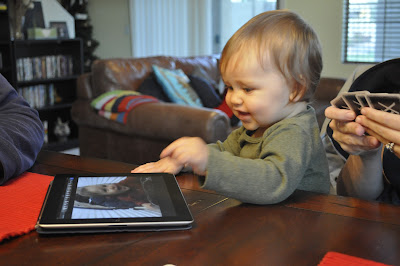 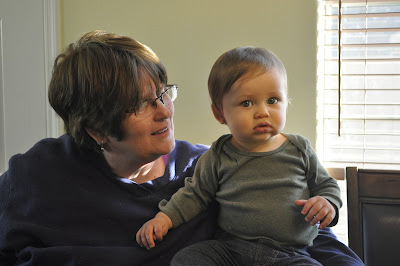 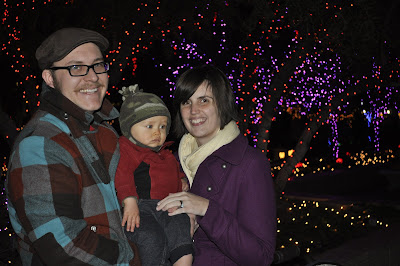 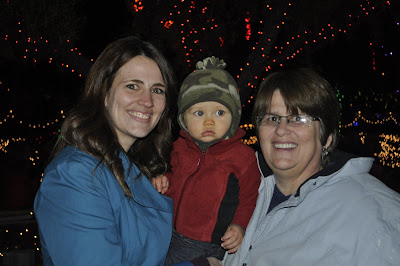 We opened pajama gifts on Christmas Eve and took pictures by the fireplace (sponsored by Netflix). 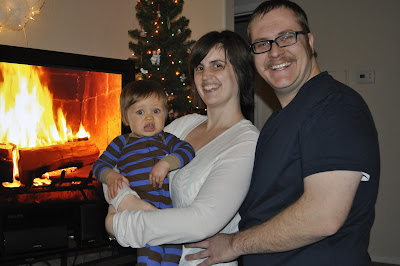 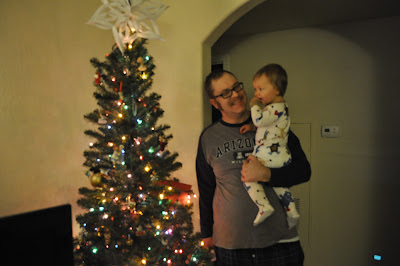 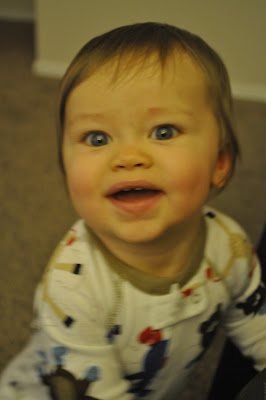 After church, and a nap, we went to visit Brady's parents until bedtime. Ollie seemed to really enjoy his first Christmas and actually still plays with his gifts 3 days later. Big success.

I guess I should do a post before Christmas. So, remember this picture? 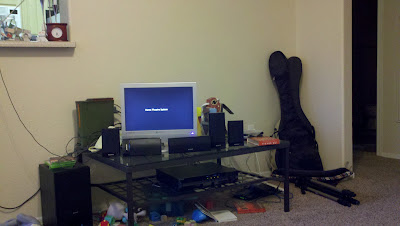 A few weeks ago, we got Big TV back! 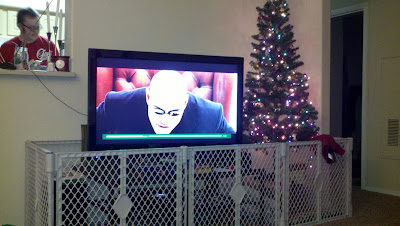 52" of Awesome! (We were watching The Matrix.)
(Side note: that is also our, baby keep away from the TV, gate. Best thing we've got for Ollie, ever!)

We were so excited to have the TV back. One of the big reasons is because our big Christmas gift that Brady had the great idea to get was a Blu-Ray player. Yup, we finally stepped into 2009. Before the TV came back we went to FYE and bought a bunch of blu-ray movies. That was challenging since we don't want to buy movies we already own, so most of the movies we got were action movies. The first movie we tried out was Tron. We were blown away by the beautiful picture. I'm officially a fan.

Oliver is doing great. He's very excited for Christmas, or at least he should be, but really he's just wandering around all the time and has no idea it's coming. He's so close to walking, it's ridiculous. 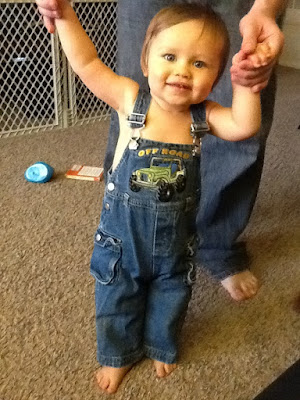 Have a Merry Christmas everyone!
Posted by The Gillmans! at 9:07 PM 1 comment:

When was the last time I wrote a Past Times? I'm not going to check, but I was looking through some old pictures and came across tons that I took when Brady and I went on many out of town trips with my in-laws Supercross team for Riley Racing. Since Brady was their video guy, he would go and film stuff for a sponsor video. And because Brady's family is super nice, I got to go too.  There are a lot of pictures so bare with me.

First was Anaheim 1. Supercross seasons always begin in Anaheim, so off we went.


Next up was in good ol' Phoenix. It's kind of fun when we know where we can get around. Pit Passes work here. 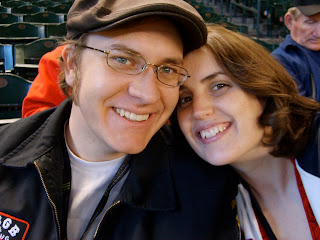 Next trip was to San Diego. This trip felt long, because we did a lot of sight-seeing on this one. We went on Friday before Supercross and spent Valentine's Day on the town.  We went to the Gaslamp Quarter and walked around. I bought Brady and myself a new hat as a Valentine's gift and we ate at the most delicious mexican restaurant called La Fiesta. We just choose it because it was mexican and had no wait. It was heaven. 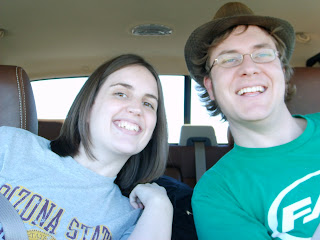 On Saturday since we didn't have much to do at the Supercross until later, we went sightseeing, a little. We stopped by the temple. We had even brought our bikes from home and went riding around, which isn't easy. San Diego has a lot of hills. 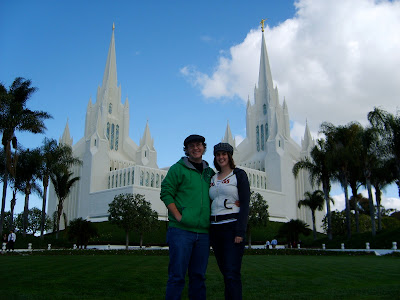 At Supercross, our group was able to steal/sneak into, a private seating box. It was a perfect seat. 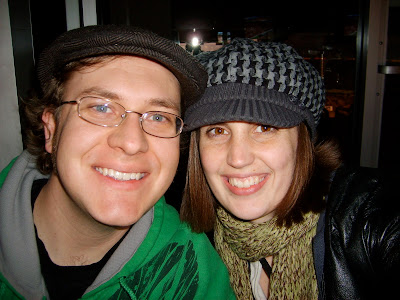 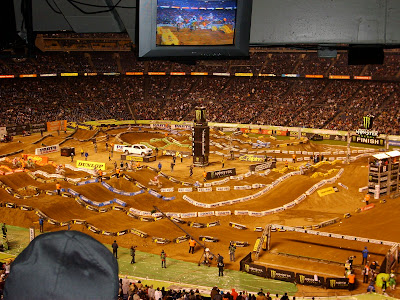 After about a month of no travels for Brady and I, we went to Salt Lake City's Supercross.  This one was probably my favorite. We got to stay with Brady's grandparents and I got to meet a lot of his family for the first time. This trip felt more vacation-like to me. 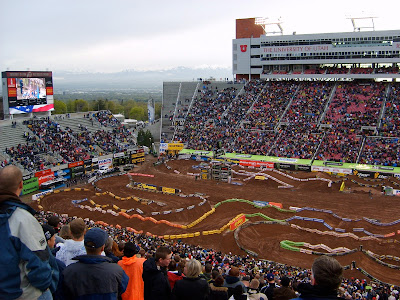 Last stop was Las Vegas for the Supercross finals.

After arriving in Vegas we met up with everyone at the hotel and decided to go to the strip for some buffet dinner. We choose Mandalay Bay. The food was pretty good, but the desserts were amazing.


We went walking around for a bit. We parked at the Bellagio and walked around there and Caesar's Palace. 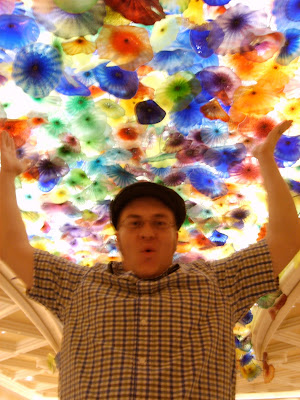 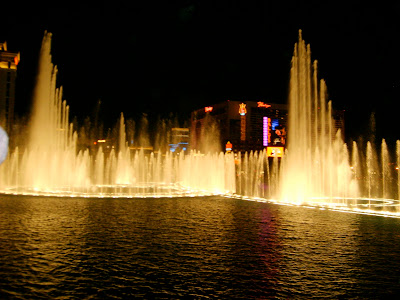 Since we were able to get away, Brady and I went and checked out the Las Vegas Temple. We also got some tasty kabobs at some little hole in wall place. 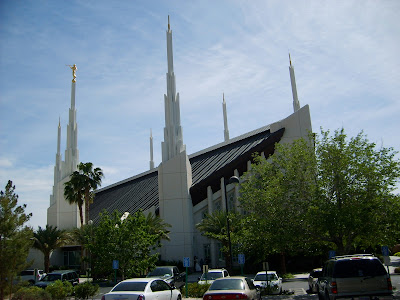 After everything was packed up, we were back at our hotel around 11:30 or something like that. But we were still in Vegas and our friend, Jeff, was 21 that day, so to the strip we went. I don't remember which casino we went to, but we got some ridiculously expensive corn dogs, and hit the slots. None of us got too into it. We would try our luck with one machine then move on. Brady won about $18 on the penny slots, but the big winner was Jeff with about a $60 win, but he was on quarter slots. We got to the hotel at 3am, way late for me. Home the next day.

It was all a great experience to be able to get out of town and sight-see as a young newlywed couple. Thanks to my awesome in-laws for allowing us to go together and make fun memories.

Posted by The Gillmans! at 7:31 AM No comments:

Two Thanksgivings. Crazy times. On Thanksgiving day we spent the day with my side of the family at my Great Aunt Evelyn's house. We saw a lot of family that we rarely see so it was fun. After too much food, Brady and I left Oliver with his Gigi and Aunt Sarah and went to see The Muppets, which was so very good. Best date night, then back to Sarah's to play a game of Ticket to Ride. Fun game.

The day after, my in-laws decided to do a Thanksgiving dinner and right after, a little Christmas. My sibling in-laws and nephews flew in for it and it was great to spend time with them and for Oliver to meet more of his family. Oliver loved Rafe and Skye. I could tell that he really wanted to get up and run around with them, however he was a little limited. But still had fun. 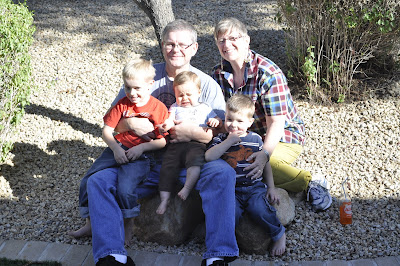 It's not a cousin picture unless someone is crying. 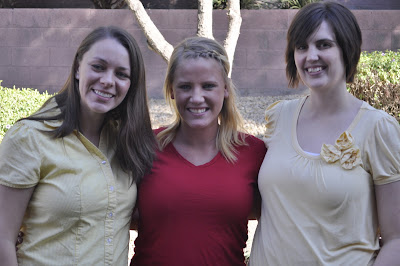 The Girls: Shannon, Susan, myself 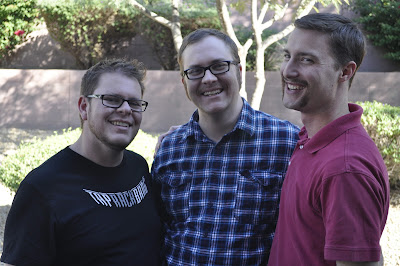 The Boys: Riley, Brady, Michael, and all the facial hair 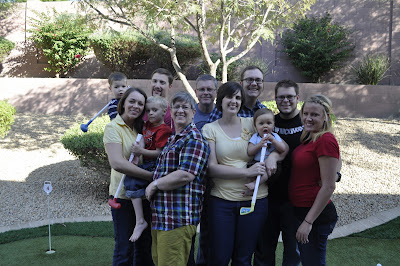 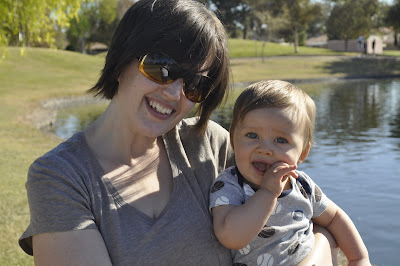 On Saturday we went to the park to feed the ducks with my mom and Sarah. I love AZ weather around the holiday's. 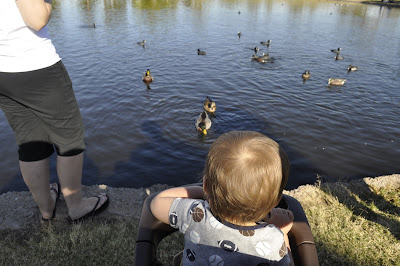 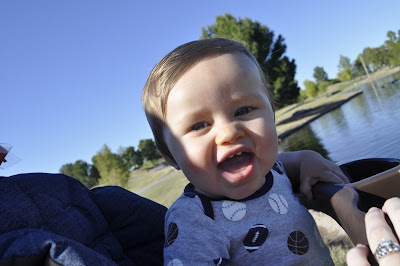 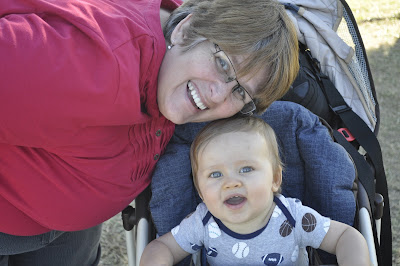 As an added bonus, check out Ollie cracking up as Rafe plays peek a boo with him.