I thought I should add an update on the ever-kicking babe. First a picture. 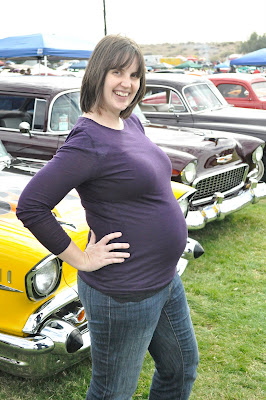 This was taken on the the 20th, when I was in my 30th week. But it's the most recent one I've got for now. I will also later blog about the car show this was picture was taken.

We have nailed down the name! And since I'm putting it on the blog, we better keep it. The name is Oliver J Gillman. Isn't it cute? I love it so much. Oliver is the only name we had found that stood out to me as a possiblity. The J comes from Brady, since it's his middle name. There is no period on the J. We're still getting used to calling him Oliver, we still end up just calling him "the baby".

This kid is kicking like crazy nowadays. And I love it. I can watch my tummy for hours as it moves in waves, it makes me laugh sometimes. I just can't believe that a little 3.5 pound baby can move so much all day long. But it is pretty entertaining.

We finally got registered for our stuff. It wasn't as fun as I thought it would be. As new parents, we had no idea what we would need. We took a list that my SIL sent us, and used it as a template, which was a huge help, but other than that, we were lost. My mom called me and listed like 10 more things we should register for, so, online I went, and added more stuff. I hope we have the important things covered.

I'm starting to get a little worried about my weight gain. I'm not going to put on here what I do weigh but I have already gained about 35 pounds. I really didn't want to gain 50 during this pregnancy since I heard that it's harder to loose, but it looks like that might happen to me. *sigh* I was taking the stairs at work throughout the whole pregnancy until last week. I just couldn't do it anymore without loosing my breath and taking one step every other minute. It wouldn't be so bad if I worked on the 2nd floor instead of the 3rd.

Comfort! It is gone. I can never really find a comfortable position to sit, lay down, or sleep in. My joints, hip wise, really ache when I stand up after sitting for over an hour or when I walk around too much. Usually at night, I can just be laying on the couch, watching TV, and I'll end up feeling out of breath, for no reason at all, that annoys me the most. I'll never take comfort for granted again.

The swollen ankles still come and go, but I think the cooler weather has helped keep the swelling down a little.

That's about it for now. I'm going to do another post soon about things that aren't baby related. I just need to get my pictures edited for it.

Stuffed Animals with Singing Mouths from Brady Gillman on Vimeo.

*Lizzing: Laughing and Whizzing
Posted by The Gillmans! at 11:04 AM No comments: