Last week was a bad week. Work was no good. Not because of my actual work that I do, just... never mind, whatever, bleh. Brady would come home and ask how my day was and I would just cry a little. My solace was the couch. Mon-Thurs night was spent in front of the TV, but not happily. Friday morning, I asked Brady to think of something, anything, fun for us to do that night. He emailed me in the afternoon with the idea to leave town. HECK YES! He reserved a hotel in Prescott and we were on our way out of town by 4:30pm.
This was the perfect idea. Brady would say that I was "hyper" on the way up there. I probably was. I was ridiculously excited to go to Prescott. I've never actually vacationed there and have no recollection of even driving through, and had no idea what we were going to do all weekend. But cooler weather and just getting away was so perfect.

We played a game called "Rubberneckers" on the way up. Brady had borrowed it from his parents house the week before. You basically draw cards and you have to find what it says on the card, like a weather vane, a car with 3 or more bumper stickers, or a pay phone, and you get points for finding the stuff. We had a fun time just talking and playing on the way up.

We roll into town around 7 and checked into the hotel and we were starving and wanted to find some food. We discovered that we were walking distance from center of town and walked to "El Charro", because Mexican food always sounds good. And it was.

Before going into the restaurant, we saw a concert going on at the courthouse grounds. It looked like the whole town was there. But by the time we got out, it was over and the stage was being packed up. We walked around the courthouse, which would end up being the center of the happenings for the our weekend. 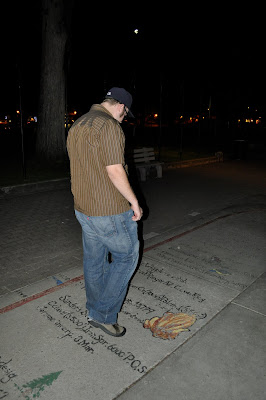 Brady reading the history of Prescott.

The weather was awesome!

On Saturday morning after breakfast at the hotel (which was surprisingly super crowded), we walked back out to the courthouse. 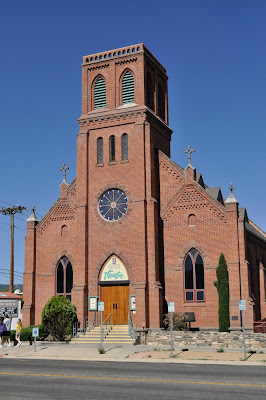 A cool church that was converted to a theatre in the 60's. 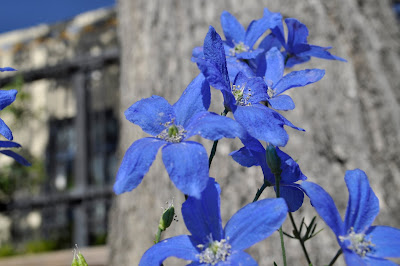 Blue flowers! Just like the ones in my wedding bouquet. Only real. 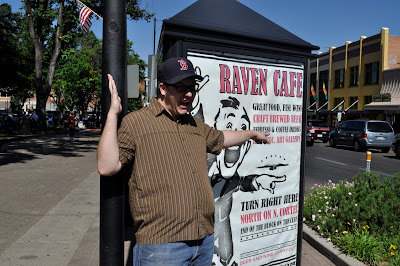 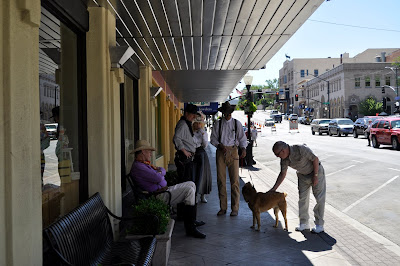 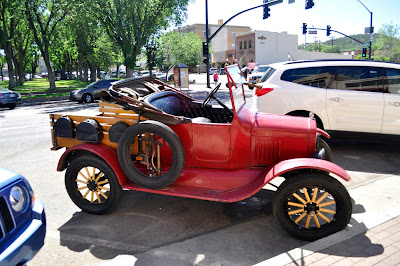 We had seen online that there was a bluegrass music festival going on, and boy, was there. We get to the grounds and although it didn't start for another hour, people were already sitting in their camping chairs waiting for it to start. Lets just say now that the crowd was 90% old people. I mean above the age of 70. It was funny. We sit on the grass and just relax and take pictures. 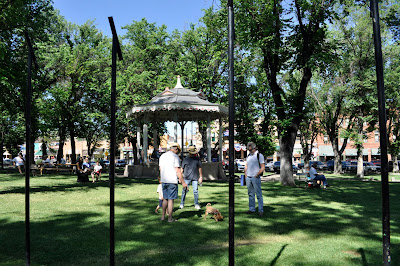 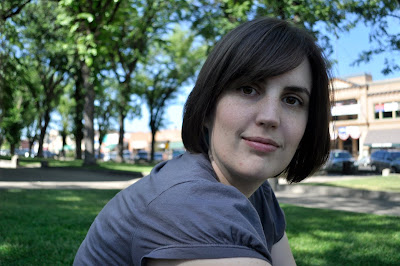 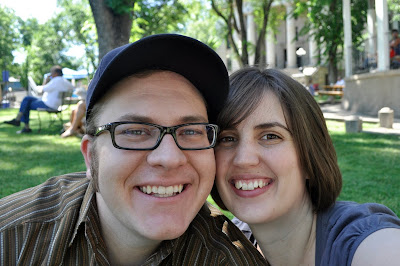 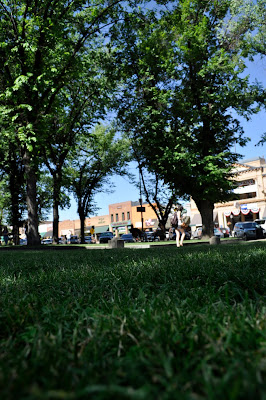 We are obviously not used to this relaxing lifestyle. After what we thought was 3o+ minutes of chilling, Brady looked at the time and saw that barely 15 minuted had gone by. Whoa. This was going to be a long day. We walked around some more checking out the many sculpture statues. Prescott has them everywhere. 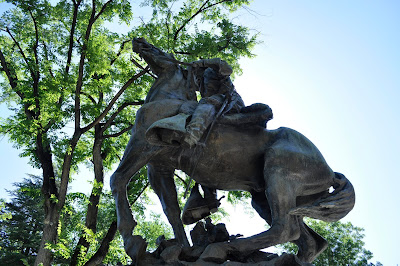 Cool statue that was unveiled in 1907! It's in honor of Roosevelt's Rough Riders and was sculpted by the same guy who did Mount Rushmore. 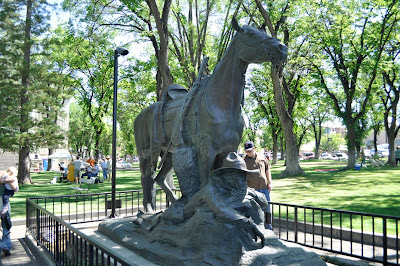 We ended up on the other side of the courthouse where some bluegrass groups were practicing. We settled on a bench and listened to them and talked, it was fun.

About 15 minutes before the festival started, we walked back to see that that crowd had tripled in size. It was now about 78% old people. 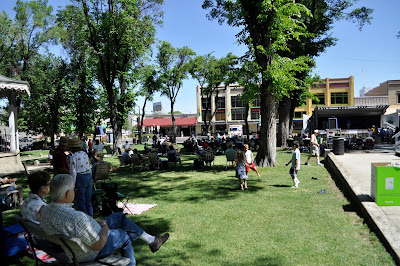 This crowd will end up filling all the grassy area,
including the other side of the stage. 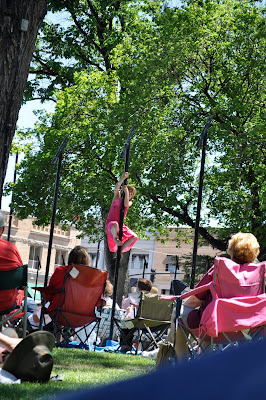 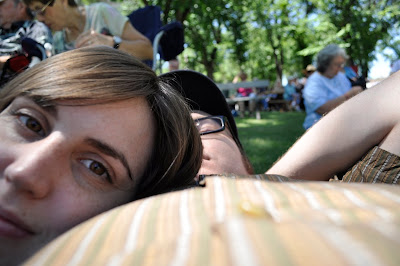 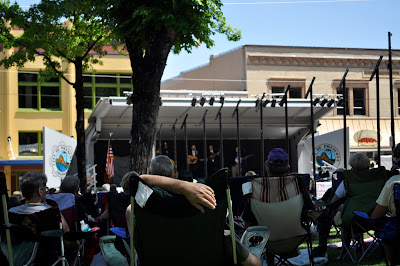 We found a little shady spot, but by the time that real show started, we wanted to go check out the shops that were now opening. Prescott has some cool little places to shop, and it's not all western themed and antiques. 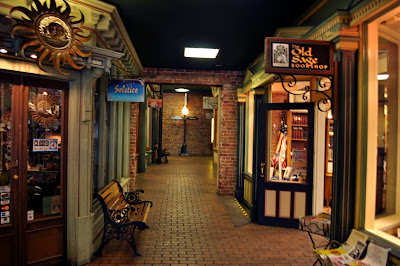 We did pass by about million antique stores, though we only went into one, yay us. 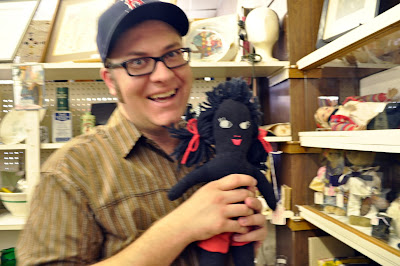 After a lot of walking around. We headed back to hotel to rest and so we can plan on a lunch and afternoon activities.

We ate some Subway and drove around Prescott. We went walking around the mall and I even bought a shirt.

Brady would start driving down a road until we were up in the mountains and then turn around and do it again on another road. We ended up trying to turn around only to be wedged between two cars and not finding a good spot to pull over for about 5 minutes, which felt like 20 minutes. It made for a good laugh. 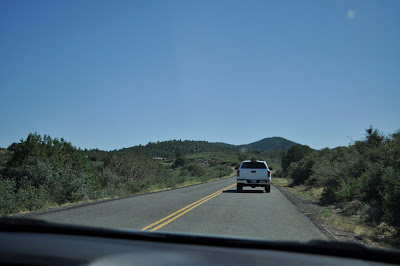 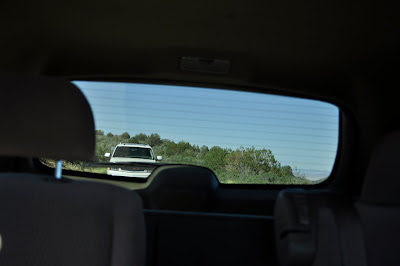 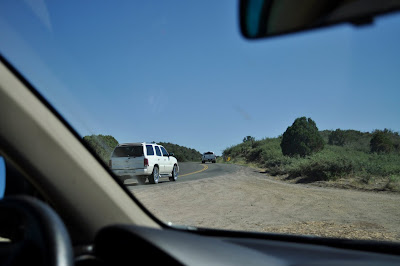 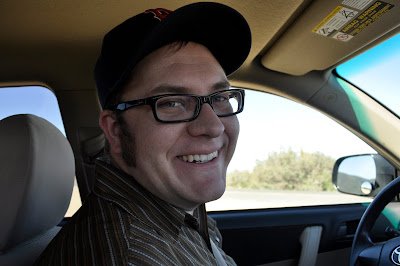 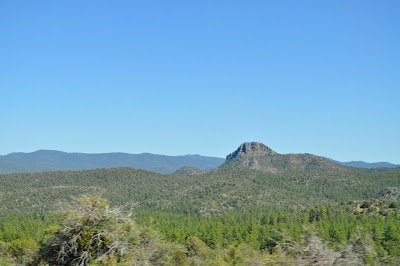 That night we went to dinner specifically to eat "cowboy food". We ate ribs at this famous saloon & restaurant called "The Palace". 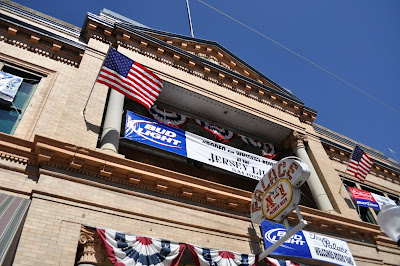 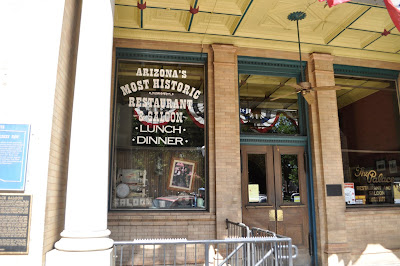 And after dinner, Brady had a big craving for pie. We looked up some good pie shops in Prescott but the good ones were closed already, so we walked next door to Albertson's and bought a coconut pie. We ate it in the hotel room and watched a movie until we fell asleep.

Sunday we left at 9:30am to be home in time for church. It was a fantastic weekend. It was great to be able to leave my worries behind (honestly, I don't really have that many). I loved being able to talk to Brady with no distractions and laugh and relax.
Posted by The Gillmans! at 12:36 PM