Disclaimer: This story has been abriged from the original "dramatic" story to protect the party's involved. 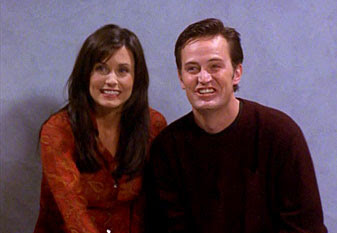 The two weeks after we met Brady and Brian is blurry to me so things are out of order here. I did finally get a job at Compass Bank, they had rejected me in a letter but then called me offering me a job working in their check processing department. I took it, sounded simple enough, and I was to start Monday, Oct. 8, but I still interviewed at University of Phoenix.

Julie and I started watching "Heroes" with Brady and Brian. The first time, we all went to Brady's place to watch, but the rest of the season we end up going to Brian's place since he had a DVR and allowed us to meet up at a later time so we could all go to our FHE's.

That week, Brady and I would become Facebook friends, Myspace friends, and connect on Instant Messenger, and talk about "Heroes" and movies.

Some time during this period, Jennifer and I hung out with Brady, Brian and Riley again. Jennifer decided that we should go to Wal-Mart to play hide and seek. The guys weren’t really into the idea, but Jennifer is pretty convincing so we all went to Wal-Mart to play. Jennifer and I rode together and realized that we’re all going to have to exchange phone numbers to play this game. We arrive at Wal-Mart and Jennifer gives the rules. We need the phone numbers to be able to get a hold of people that can’t be found. Or get hints. So we ask Brady for his number, he gives it but then he's like, “OK let’s play!” and walks away. He didn’t get our numbers! Two girls are standing in front of him willing to give him their phone numbers, and he walks away? Ok then. Well we play, Brian has to look for people, and we all split up. The guys are basically not into it. Jennifer is never found but while we looked I got to walk around with Brady, just the two of us, which was kind of nice/nerve racking. After Jennifer reveals herself we decide to call it a night since the guys weren’t having fun playing hide and seek. Jennifer was really disappointed in the night all together and complained about how they guys didn’t even try to have fun. Jennifer is a rash person and acts quickly and decides that she never wants to hang out with them again. We got home that night and Jennifer complained some more to Julie. I told Julie that although the night was kind of a bummer, I was still interested in Brady and didn’t want to cut him off.

Jennifer did calm down and we hung out with the guys again that Thursday, I believe it was October 4. I remember the date because it was the day before Chandra and Cort’s wedding. We went over to their place and Brady had bought an Xbox and Guitar Hero games, it turns out the game he had before was borrowed. We all went to the newly built Tempe Market Place and walked around Barnes and Noble. I walked over to the movie book section alone and Brady followed me. Eek! He asked me if I saw anything good. I recommended a couple books about editing that I had bought before and we walked around some more looking at books and talking about the one’s we’ve read. Brady loves reading and although I start reading more books than I finish, I was able to hold my own in this conversation. Yay me. It was pretty late by now, so we head back to Brady’s place. Brian goes home and Jennifer and I were going to Sonic and Brady ends up coming along with us. While at Sonic, we sit and talk in the car for 3 hours! Until about 1am, I think. Mostly the conversation consisted of Jennifer debating with Brady about Robots and other things, Jennifer loves debating over things. I mostly sat back and listened. I did kind of feel left out, because I did have a little crush on Brady.
There was a new Arby’s opening up, and for a week, if you are one of the first 25 customers of the day, you get a free Arby’s meal once a week for like a year or something. Jennifer and I had tried waiting in line earlier that week with no success since people were already camped out, so she wanted to try again that night. She asked Brady and I to go, I said no. I had a wedding to be at 8:30 the next morning and was only looking at 6 hours of sleep, big no! Brady said no, but Jennifer begged and begged until he said he’d go. He didn’t seem excited but, oh well.
We dropped Brady off at home and Jennifer took me home and she freshened up. I sadly went to bed as Jennifer left to get Brady.
Posted by The Gillmans! at 3:48 PM