A little more back story. At this time, one of my roommates was Julie, she was not one to shy away from a guy interested in her and so she would even do the internet dating thing. She didn’t date or meet every guy she met online, but she would chat with them at least. Well, a guy named Brian contacts her through Myspace. She had a video of “Flight of the Conchords” on her page and he had heard some of their songs, so he used it as an excuse to start writing her, since she was cute. (BTW: I introduced her to Flight of the Conchords, and of course she fell in love. Seriously people, they are amazing!) So they emailed and talked on the phone every once and a while for a month, maybe two. They decided that they should hang out so Julie told Brian to bring friends over to our place and she’ll have her roommates there and we’ll play games and what ever. Brian told her that he’ll bring his best friend. Julie got my other roommate Jennifer and myself all excited to have these guys come over just because we wanted to meet some different people then the normal people we see all the time. 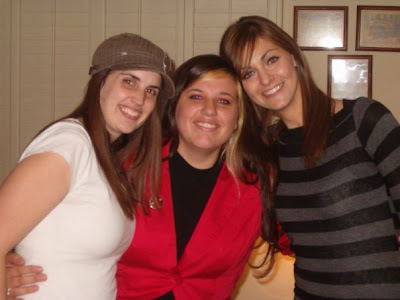 Me, Jennifer and Julie

When the time came for them to come over, I wasn’t in a social mood. I don’t know why, I was just feeling grumpy. Well I heard Brian and his friend come in and talking to Julie and Jennifer. I finally joined them and was introduced to Brian and Brady, (“like the bunch”). There was no “love at first sight” or anything, like I said, I wasn’t looking to date anyone. I didn’t take much notice with Brady, I recognized Brian though, I met him really briefly like a year before, he was an old mission companion of my friend Cort; but I don’t think he recognized me, so I never said anything. This night was kind of uneventful in the sense that Brady and I didn’t really talk at all.
We introduced the guys to the awesome game of Ligretto.

They didn’t like it since it’s a fast paced game, and they weren’t any good at it. Some friends of my roommates came over and we decided to play a game that Jennifer had made up. The game is to pick a movie and recreate scenes and take pictures using a random object, like a slinky, as the main prop. The other team has to guess what movie you are portraying. We split into two teams, and set out. We debated over the movie to use, even venturing into my bedroom to get some ideas from my movies. Yup, I met Brady and Brian and an hour later they were in my bedroom checking out my movie collection. Very scandalous.

We settled on “Forrest Gump”, I think, and decided to leave the house and go to Wal-Mart to take our pictures. On the way there, everyone decided to change from “Forrest Gump” movie idea to “Tremors”. I suddenly felt inadequate, I hadn’t seen “Tremors” in forever and didn’t remember it, let alone, like it. So everyone had to set things up and I just took the pictures.

And here are the "Tremor" picture highlights: 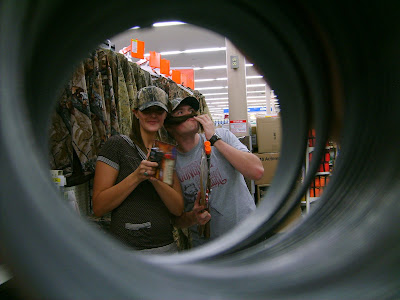 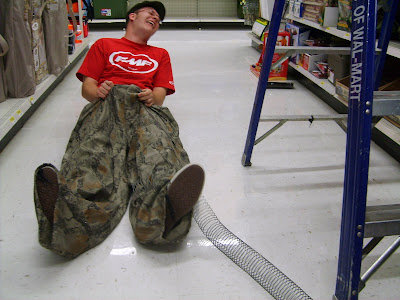 The first pic I ever got of Brady. 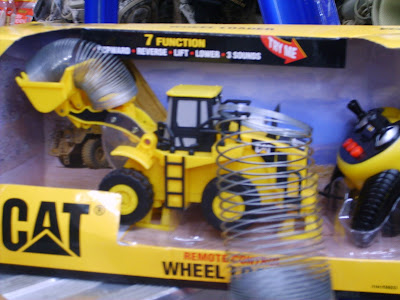 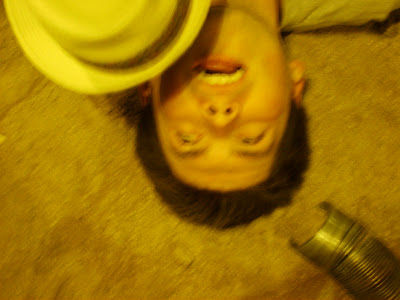 The night ended and we had fun and thought that Brady and Brian were fun, but none us were won over by their charm, yet.

The next day was a Stake Talent Show, and Jennifer and Julie were going to be performing a FOTC song, or lip-synching I should say. I was hanging out with Sarah at the show for a little bit. I had told her about the night before and not 2 minutes later, we see Brady and Brian at the show. They were all “Hey, what’s up?” to me and they said that we should all go to Brady’s place later to play Guitar Hero. I told them maybe and left it at that. Later we were debating about whether we should go. We were trying to not hang out with the same people everyday but when it came down to it, we thought what’s two days in a row? So we went. I had never played Guitar Hero before, neither had Jennifer, we had tons of fun playing. While we all chatted, I learned that Brady was going into the Film Production program at ASU. No way! I had just graduated from Scottsdale CC’s film program, emphasis on editing, and Brady also wanted to be an editor! What a coincidence! I still wasn’t really interested.

Tangent: Once thing about Jennifer, she loves nicknames. She would usually make up a nickname for people so she could talk about them without them knowing she’s talking about them (Her phone contact list looked like it was in code). We figured out one for Brian pretty easily however, Brady was hard one to figure a nickname for. We would usually go off of something that stood out about that person, usually something unflattering, yet funny. Brady didn’t have any qualities that stood out that a nickname could come from. He wore glasses, but that’s not funny. He wore a hat all the time, but we kind of liked that, so no nickname. He ended up being “John Doe”.

The day after playing Guitar Hero with the boys, it was a Sunday. And by night time, Jennifer and I were itching so hard to play more GH. We didn’t know anyone else that had the game, but we didn’t want to hang out with the guys three nights in a row. That would put us in the same boat as before, same people, every night. But we really wanted to play. We gave in. Neither of us had their phone numbers so we had to recruit Julie to contact Brian and ask if we could go to Brady’s to play. It sounds so ridiculous now that I’m typing it up, but it happened. Brian text Julie telling us that we could come over and play. Yay!

We all went over to Brady’s place and I saw Brady for the first time without his hat on. I thought he looked so different. 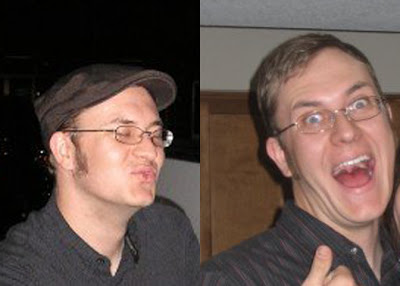 We met Brady’s brother, Riley who lived with him (we may have met him the day before, but I can’t remember). We played guitar hero, and Brian and Brady showed us some videos of a ridiculous BBC show that they loved called “The Mighty Boosh”, it was slightly funny, but FOTC is better. Jennifer thought that I should start talking to Brady and get noticed. I was pretty shy and not good at starting conversations so she would be like “Hey Brady! Nicole went to film school too!” and he would be like , “Really?” and then we would talk a little about it. Brady was getting cuter to me and he was really nice and not as crazy as Brian. I start to be interested in him, but no crush... Yet.

To be continued.
Posted by The Gillmans! at 2:45 PM