Here we are, Disney World! Today we go to Disney's Hollywood Studios. Today we also learn to hate Brazilian Tour Groups. The whole week or our trip, Brady and I kept seeing these big groups of Brazilian teenagers everywhere. We didn't really care to much, until Thursday, at Hollywood Studios. Two frustrating stories ahead. 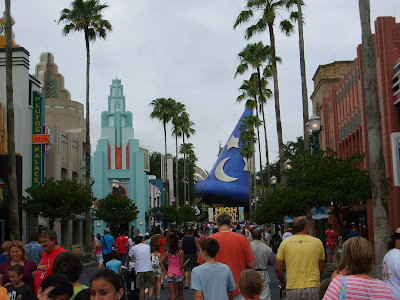 We walked into HS and it was already pretty crowded. It also has kind of a weird layout, so we found a street to walk down and looked to see where it would lead us. 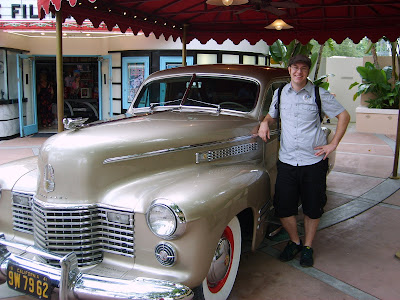 They have random little movie themed shops that we browsed then we went and got fast passes to the Aerosmith Rock 'n' Rollercoaster, and this is where we have our first frustrating moment with the BTGs (Brazilian Tour Groups). We're standing in line to get our fast passes and it's moving along pretty fast, then it all of the sudden stops moving. We look ahead and see a kid with HUGE stack of tickets getting fast passes, one, by, one! This stack must have been 3 inches thick. Of course he's with a BTG. We're all getting pretty ticked. Finally a frustrated person behind us tells a cast member, and the cast member tells the kid that he needs to step aside. We got our passes although an hour for the return time had elapsed since we got in line.

So we now had a couple of hours to burn so we head to the Hollywood Tower of Terror. It was awesome. The ToT at Disney World is better and than Disneylands because it has more story in the ride, instead of just the drop.

Still with time to kill, we decide to run over to the Indiana Jones Stunt Show. Which was starting in about 15 minutes, we get there and can't get in! Why? You ask. BTGs! About 15 BTG Leaders are holding hands in this long line, blocking the entrance so their HUGE group can get in and nobody else! I'm pretty sure that this wasn't allowed. Since one puney cast member looked helpless while this was happening. Once the BTG got in, everyone standing outside, like us, was informed that only standing space was available. Stupid BTGs! We are now fuming and will never go to Brazil. 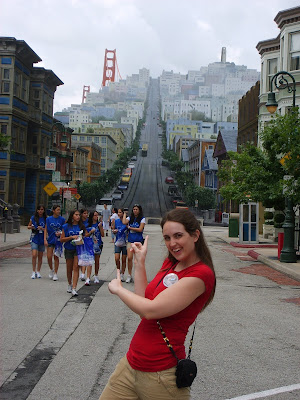 We walk a few steps over to Star Tours and enjoy the awesomeness. We even saw some young kids fighting Darth Vader with light sabers, pretty cute.

If memory serves me correctly, and it probably isn't, we went back to the Rock 'n' Rollercoaster. 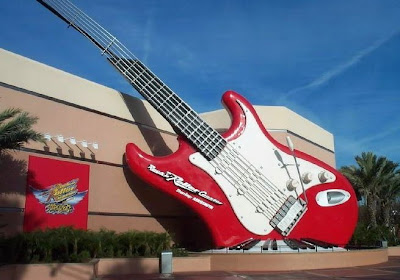 This ride is awesome! It's so dark on the roller coaster that you really can't see where the turns are. This ride became one of my favorites. 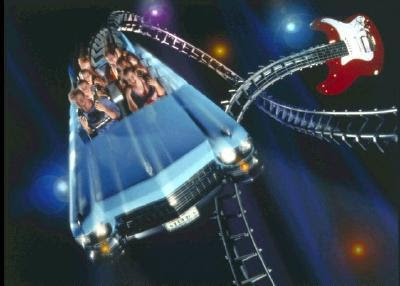 Next we went and saw "Lights, Motors, Action! Extreme Stunt Show"! This is a show all about stunts done with cars, motorcycles, jet ski's, the like. It was pretty cool. 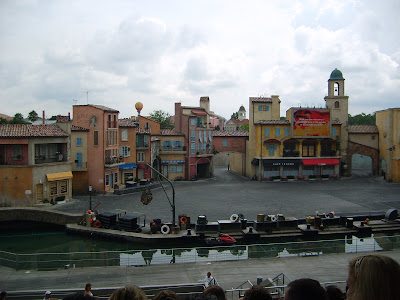 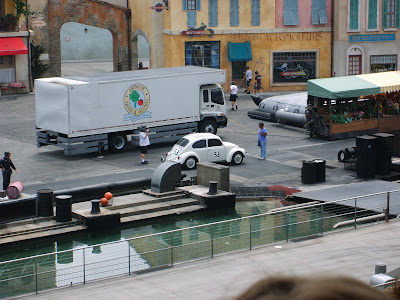 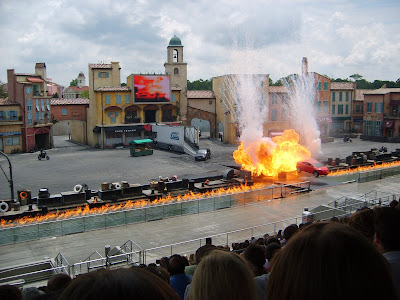 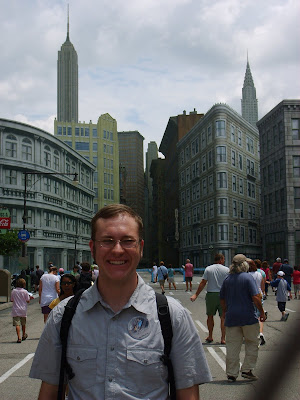 Random one of Brady in "New York"

Next we went on "The Great Movie Ride"! 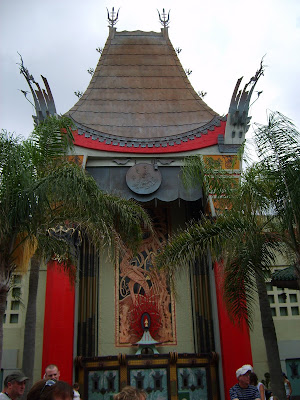 They had some movie memorabilia around the lines. 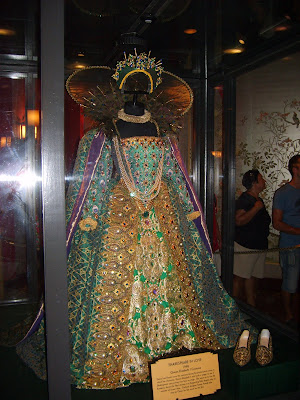 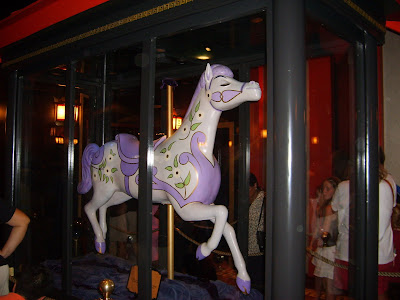 This ride is all animatronics and cheesy "tour guides". It was good for a laugh, and a little sit down.

LUNCH TIME! Brady had read about the Sci-Fi Dine-in Theater Restaurant, and wanted to try it. We arrive and put our name in. 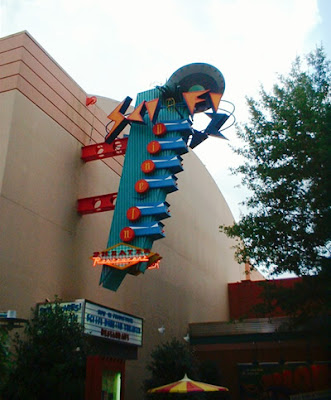 When you first walk into this place, it looks like the back of movie set, very warehouse-ish. We waited about 20 minutes and then the guy at the front desk announced to people in line that if they don't have a reservation, they won't be able to get in. We already had our name in so we were good. They then call our name and take us down this narrow hallway of backstageyness and we go through this entrance and we all of the sudden feel like we're outside, at night, at a drive-in theater. All of the tables are in cars. We sit down and about 5 minutes later another older couple gets seated in the backseat of our car. We chatted with them a little bit, they were nice and had recently been to Tempe to visit one of their kids, or something like that. Our waiter was a lot of fun. He was all excited for us being Just Married. He took a bunch of pictures of us at all angles and even took our camera to the back to get a shot of the whole place. The food was delicious, we both got burgers, yummy. 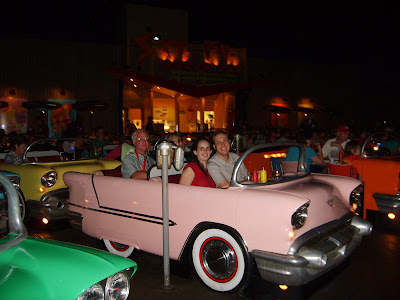 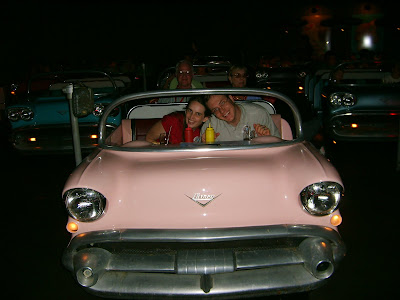 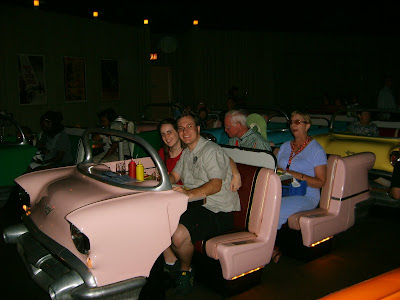 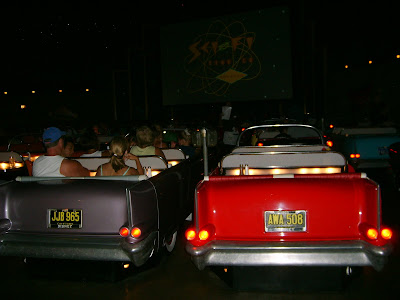 The restaurant plays old Sci-Fi movie trailers (when we were there), and old disney cartoons with a sci-fi theme. The sound really did come out of the speakers next to our car. This restaurant became our favorite instantly, not only was the food good, but the atmosphere really is amazing. It was so much fun. 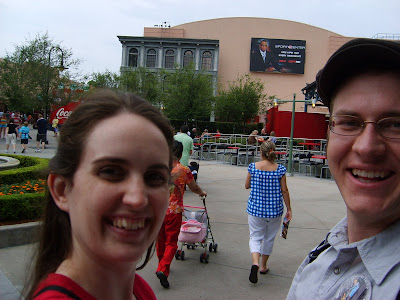 Now that we were fed we decided to go on the Studio Backlot Tour. This is comparable to the Universal Studios backlot tour, but not as good. Probably because they don't have enormous sets like Universal does. 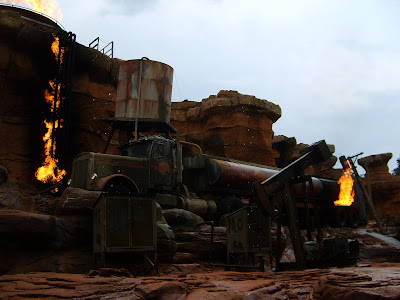 Oh no! That truck is gonna roll onto us! Not really. But a huge wave of water came rolling down over the top of the "canyon" I got a little splashed.

Where the tour ends they have a shop that has more memorabilia. 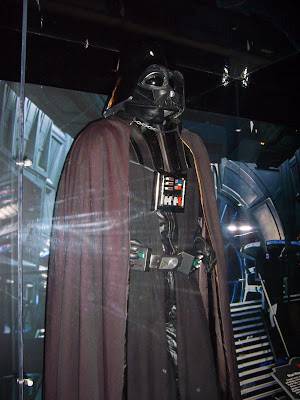 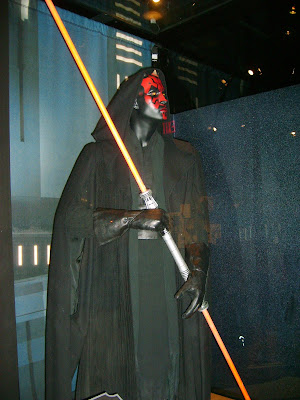 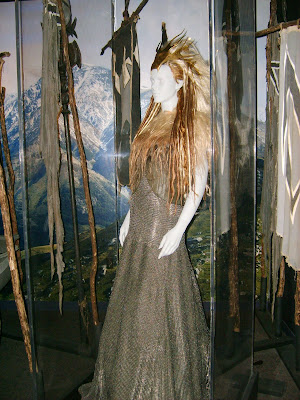 Ice Queen from Chronicles of Narnia 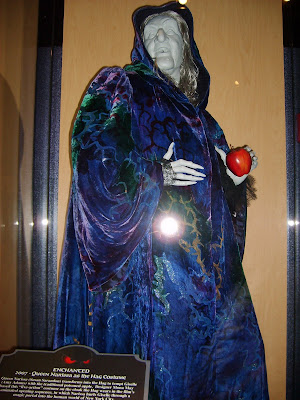 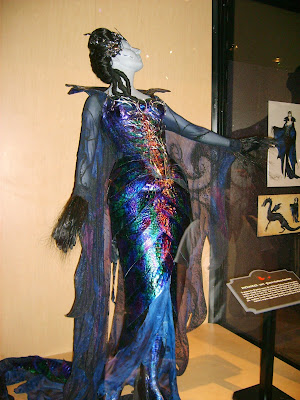 The Evil Queens costumes from Enchanted 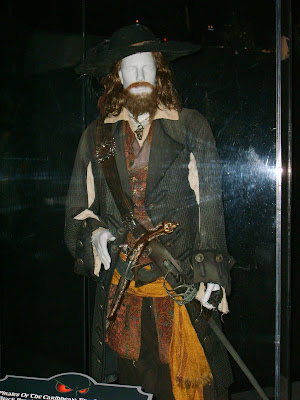 Captain Barbosa from Pirates of the Caribbean 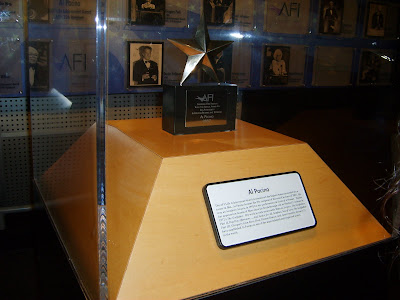 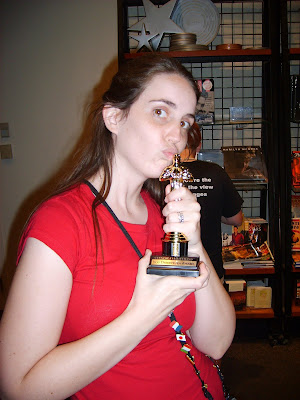 We were now tired and had enough of Hollywood Studios. We decided to head back to the hotel for a nap. 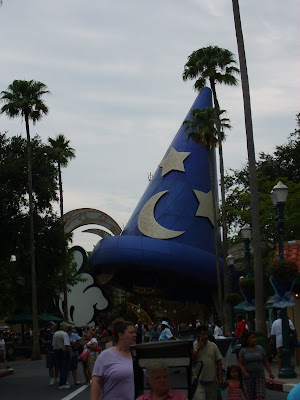 After resting for a bit at the hotel, we decide to go somewhere nice for dinner. We wanted to try something new and Moroccan food sounded good. We took advantage of our concierge service for the first time and had them make a reservation for us for 7:30pm at Marrekesh in Epcot.

It was probably about 5pm at this time so we decide to go to Epcot and do something before dinner. We get there and are walking by Test Track and see that the wait is 70 minutes. We thought this sounded perfect so we we decide to get in line and wait and be out in time to go eat. The line was long, slow, and stopped for too long everyonce and a while. Well, we get near the front of the line and the ride breaks down, again. Since we were so close and had a little extra time before our reservation, we decided to sit and wait.

After about 15 minutes, it starts up again and we move on. We move into this dark room where they showed a video or something, I don't remember because I all of the sudden got really dizzy and light-headed for no reason. I squat down for a second, thinking it will pass, when we had to start moving again. I was sure I was about to faint and felt really cold. I tell Brady I'm dizzy and we stop in a corner so I can sit down. Brady's pretty worried and wondering what's wrong, and I don't know. I just felt really faint. There is an exit right behind us and Brady is telling me that we should leave. I was quite resistant. We've been in line for about 90 minutes now and were so close! I could see the cars! And I know Brady really wanted to go on this ride. But being the amazing husband he is, he pulled me out to the exit. We sit down for about 10 minutes and I feel that I can walk again. Brady said that I was really pale. Well, I was hungry, so Brady supports me while we walk over to the restaurant. 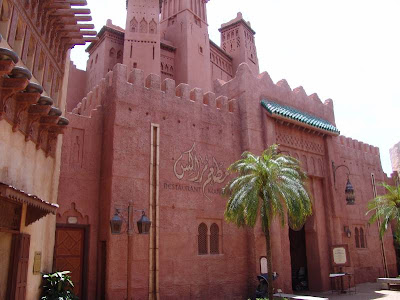 We get seated in about 2 minutes, hurrah for reservations. 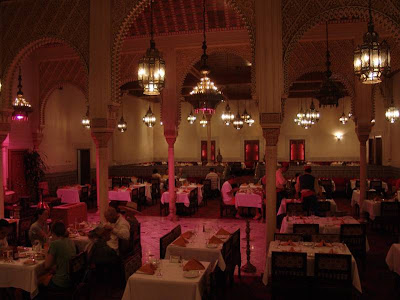 The restaurant was pretty cool, as you can see in the picture above, very Morrocan. We got seated in a weird place though. It was a small table, almost right on the aisle and we were next to a pillar and the waiters would all walk by us really fast and the dancing area for the belly dancers were right next to us. Slightly awkward place. I got some kabobs which were delish and we got baklava for dessert. And I decided that Morrocan girls are the prettiest.

I was feeling a lot better now, as if nothing had happened, and felt really guilty about missing out on Test Track. By the time we left the restaurant, Epcot was closing so we head for the exit, Brady trying to be adventurous, takes us on a detour and gets us lost and in a dead end. We managed to get out and back to the hotel for sleep.