Past Times: WDW Animal Kingdom and the end

On our last full day of Walt Disney World, we went to the Animal Kingdom. We only spent half a day here since we were pretty tired by this time and we weren't as excited about AK as we were about the other "kingdoms".

We started today a little more special since our honeymoon was coming to a close. We ordered room service for breakfast. I've never done room service so I was excited. We each got one of those big breakfasts that come with every breakfast food imaginable. It was delicious and the lady that delivered it was very funny and cute asian lady. Oh, I need to go back and tell a little story I forgot about. Remember that wine that was given to us when we first arrived? Well, it sat there for a couple days untouched, since, of course, we don't drink. I started to feel bad that they have wasted this bottle on us, so I decided to leave a note one day saying "Thank you for the sparkling wine. However, we don't drink. Sparkling Cider?" Yup, I inadvertently asked for a bottle of sparking cider instead. They next day, the wine was gone and cider was in its place! It was so nice of them. We loved it. And come to find out that the lady that brought us breakfast also gave us the cider. We thanked her tons. 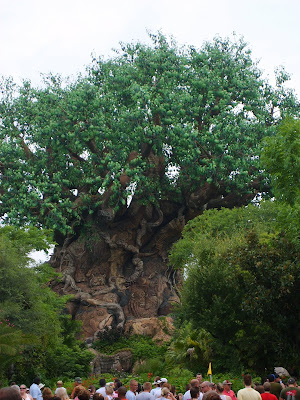 We headed to Animal Kingdom, we were already so tired and so this day was going to be quick. We walked in and it was something like the San Diego zoo, to me. It was pretty to walk around all the green. We went over to the Africa area and went on the Kilimanjaro Safari. You ride a truck through "Africa" and see all the animals around. We did see basically all of the animals but I think we went at a bad time since they were all far away. My camera also died during this time and the pictures I did get were blurry. Photo fail. 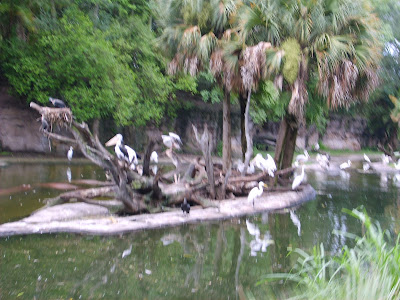 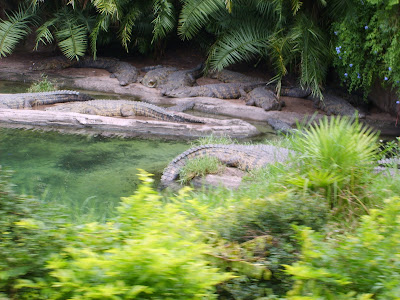 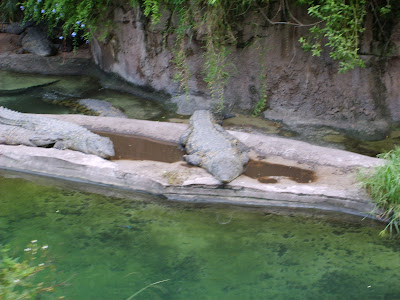 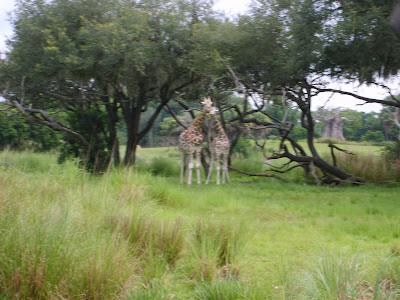 We then headed over to Expedition Everest, the roller coaster in AK. We got some fast passes and looked for something else to do in the mean time. Nothing really was catching out interest. We people watched a little bit and relaxed. 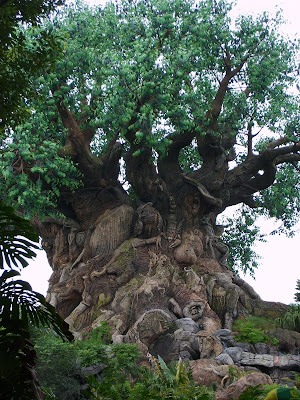 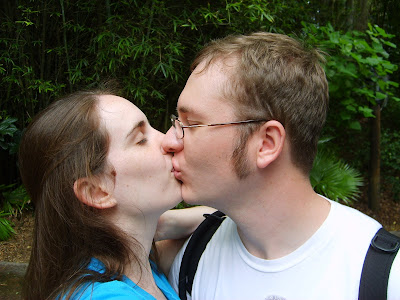 Taking time out to smooch. 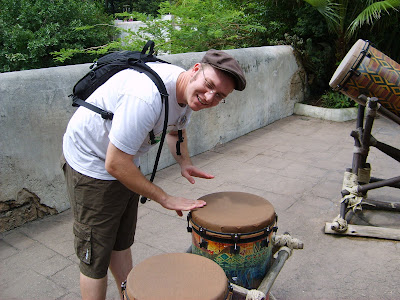 While walking I saw a bird show, Flights of Wonder, that was starting soon so we went ahead and went in to watch. It was a really good show. I got a few pictures. My favorite was when they brought out a bald eagle. It was awesome! 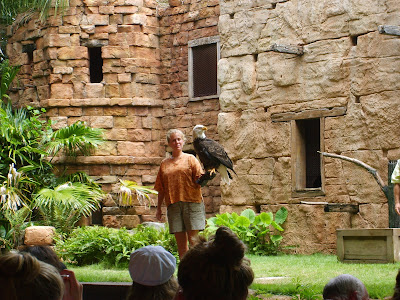 After the show we still had time before we could use our fast passes so we stopped by a little place and got Coca Cola slushies. We saw a little "room" on the water that was empty of people and it had some stools to sit and look at the lake so we sat and gazed at nature. 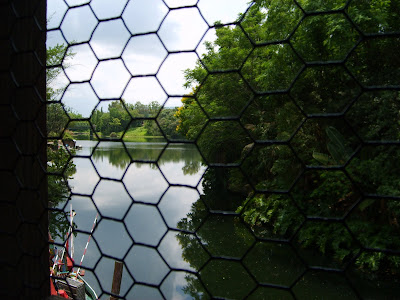 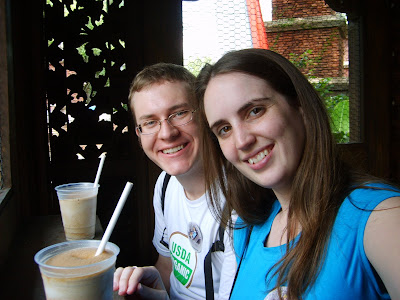 I don't know what was in these slushes, but oh my, did I go crazy after drinking mine. Brady still talks about it to this day as the moment I lost my mind. I guess I got really talkative and hyper.

We then headed over to Expedition Everest! 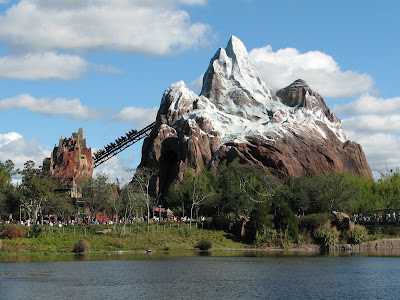 This ride is perty awesome. Disney sure has been stepping up on their roller coasters. This one is like an updated version of the Matterhorn.

And that was it for Animal Kingdom. Yup. We left after we rode the coaster. We were tired.

I think we just went back to the hotel and slept until dinner.

That night we went to Downtown Disney to find something to eat. We settled on Planet Hollywood. I had never been here so this was interesting. We get seated in, of course, a weird spot. There is a live DJ on this stage and we were seated right below his stage and next to a staircase. I swear they put the table there when we arrived. I found a picture of the inside to illustrate where we sat: 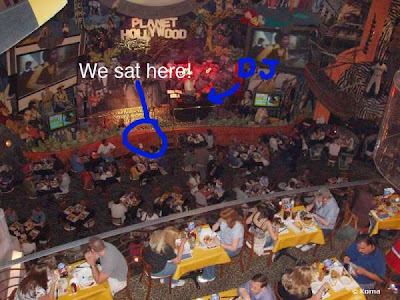 This wasn't our favorite restaurant.

We decided to skip Pleasure Island all together. We did do a little souvenir shopping. There is a Christmas shop at Downtown all year round and we bought a Christmas Tree ornament that was a ball with the Mickey-Minnie wedding ears on it, and it said "Our Honeymoon". I thought it was a perfect memento for us.

The next day was a half day. We took our Just Married buttons off and put them in our luggage since we didn't know if the airport would allow us to have them. When we were checking out, I guess the hotel has in their computers that we are Just Married and the guy checking us out asked us why we weren't wearing out buttons. We told him that we packed them. He pulls 2 more buttons out of a drawer and tells us to put them on. It was funny and we obliged. 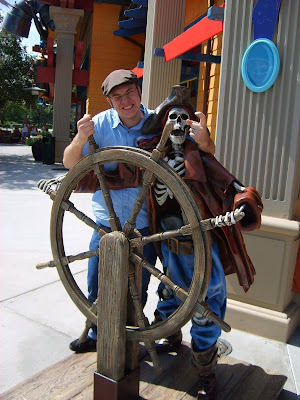 The only picture taken the last day.

As part of the awesomeness of doing everything through Disney.com, we were able to check our luggage for the flight back at the hotel, and they took it to the airport for us. We were able to do this hours before our flight so we didn't have to cart our stuff around. We went to Downtown Disney to shop a little bit, I bought a couple little things for my mom and sister. We got some Ghirardelli Chocolate sundaes, yummy, and basically got on a bus to go to the airport.

I have a story about the flight back. You wouldn't believe who was on the flight with us. BTG!!! Oh Yeah. One of the infamous Brazilian Tour Groups was on our flight to Texas. They took up half the flight. One the leaders sat right next to me. They really weren't bad, they mostly slept on the plane. Also, it took forever for us to take off from Orlando. They must have the longest runways because we drove and drove and drove. Brady eventually leaned over to me and asked "Are we driving to Dallas?" I got a good laugh out of that.

That was it, our wonderful Disney World Honeymoon.

Other things we did that had forgotten to include:
Overall, we had an amazing time. I never regretted for a day choosing to go to WDW for our honeymoon. It had everything we wanted. A nice hotel, low-stress, and built in entertainment/guaranteed fun. I hope to go back again one day with my amazing hubby and future kids (or without the kids ;) ).
Posted by The Gillmans! at 7:15 PM