July 10, 2009: Brady and I woke up early (5ish) to be ready to leave at 6am for New York City! No complaints from me. Blake, Michael , along with Rafe, drove us to the very north end of Boston to catch a subway to the South Station in Boston to get our train to the city. I didn't take pictures of the train and station so here are some googled images of South Station: 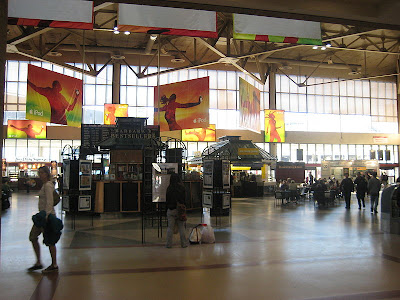 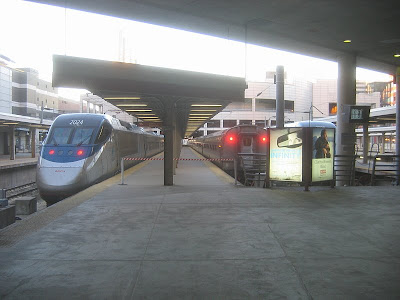 We unknowingly chose to sit in the "Quiet Car". This was again, delightful. No screaming kids and people yapping on their cell phones. 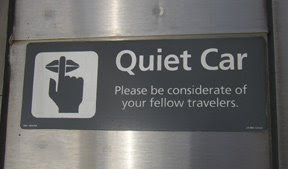 Our ride was a little under 4 hours but it went by fast. The seats are comfortable, lots of leg room, and you can get up and move as you please. Brady and I took a trip to the dining car, which was two cars down from us. We had trouble walking since the train rocks at times. I almost fell onto some one sitting in a booth, it was almost embarrassing.

The dining car has a guy that stands in a place like in this picture below. They sell, sandwhiches, snacks, candy, drinks, and other stuff I didn't pay attention to. Brady and I weren't too hungry, so we got hummus with crackers and some drinks. It was good. 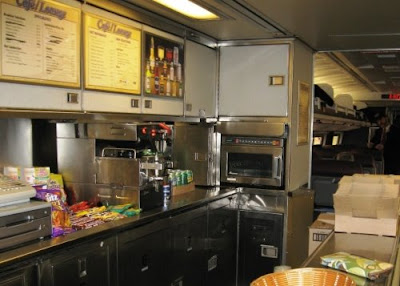 We sat in a booth and chatted. Then went back to our quiet car (through the deafening, kid infested, loud car). Before we knew it, we were riding into New York, it was pretty cool, and I was so entranced, I didn't take pictures. 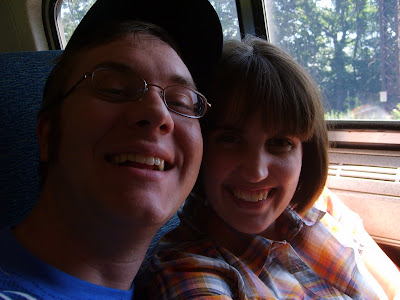 Our train took us to Penn Station. No pictures from me, but that is the beauty of Google Images. When we walked out I just remember seeing Madison Square Garden right next door with cabs lined up bumper to bumper to pick up train passengers. 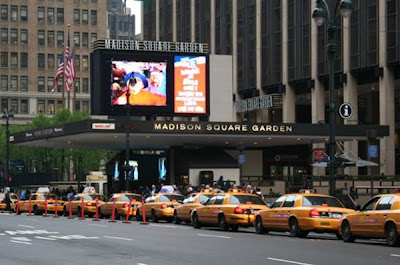 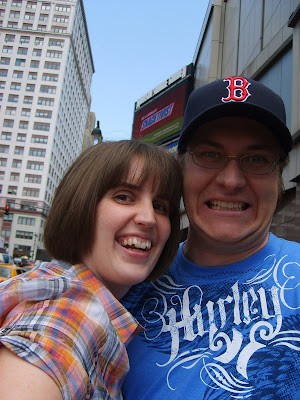 Us just walking out of Penn Station.
We hopped into a van cab (not the Cash Cab). And he got us to our hotel in a jiffy.
Our hotel, as I've mentioned before is the Doubletree Metropolitan Hotel. The location was good and everyone that worked there were very polite and helpful. The lobby was pretty small and always croweded with people. It was weird. I didn't get a picture of the lobby because I didn't want to look like I was taking pictures of random people at our hotel. So imagine this picture below filled, every seat, the floor, the arms of every couch, with random people, and that's what it was like, all the time. 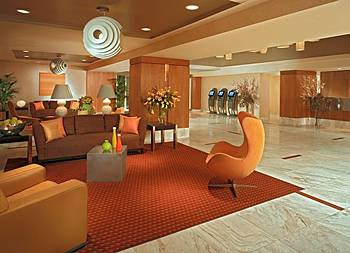 We stayed on the 9th floor. We had this awesome view. 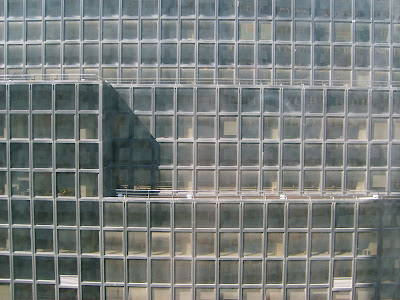 It was ok though, we were safely located right above the police department. 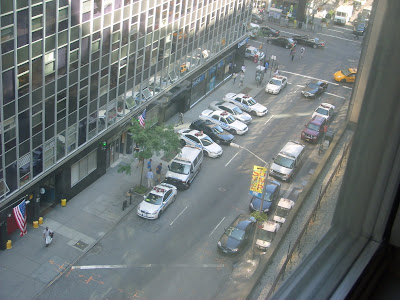 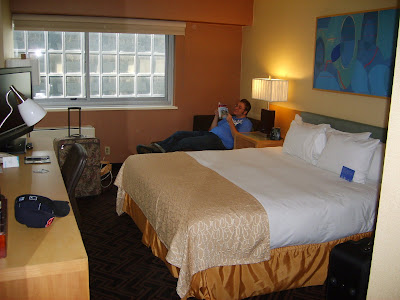 Our little room
After we dropped our luggage at the hotel, we decided to head to Soho to do some shopping. I got a little overwhelmed once we got there. I felt like a fish out of water, Brady had to calm me. I was able to find some new t-shirts at H&M and some store called Zara's. 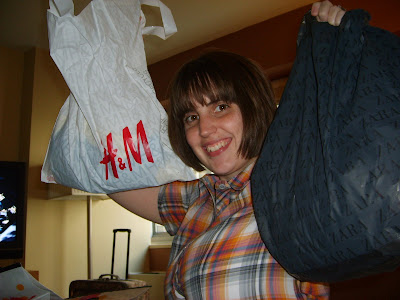 We then went back to the hotel and relaxed for a little bit and decided to go to Chinatown to eat.

We did the Subway thing from here on out. It's cheap, we bought a week pass, for unlimited rides. I thought the subway would be scary, but it wasn't. 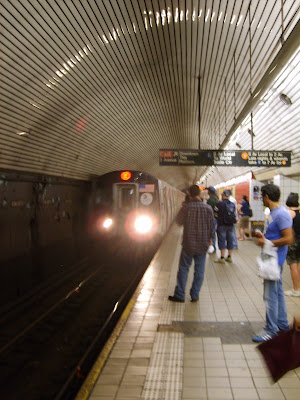 So we get to Chinatown and decide to walk first to a very special destination. 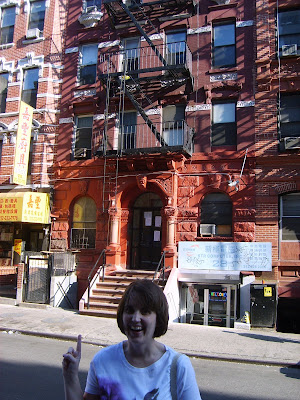 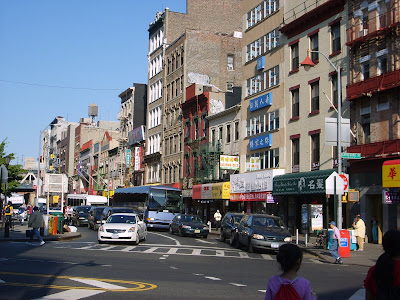 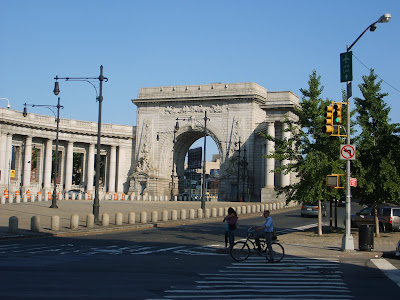 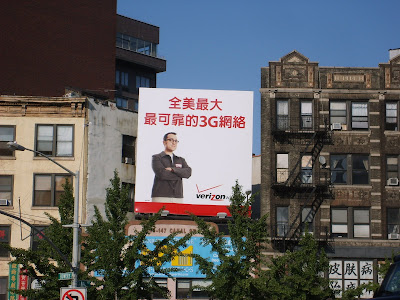 We then went to "Noodletown". This restaurant was recommended in a travel book we bought. It was good yet different. This was probably the most authentic Chinese food I've ever had to I had to get used to it. I liked it the more I ate it. I got a beef/noodle bowl thing. I can't remember exactly. 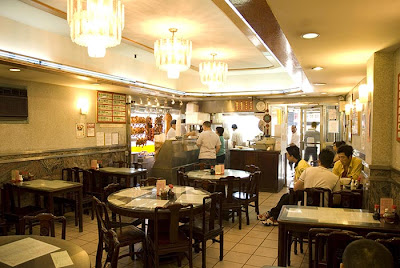 We sat in the table against the wall on the far left!

We didn't get drinks with our food at all, you have to take the initiative to order it, that waiters don't ask if you want anything to drink. Oh well. We ate, and then walked over to a drug store and got Dr. Peppers. 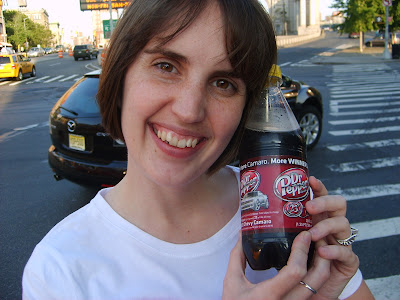 We did some walking around, we passed by a New Era store and I got my NY Yankees hat. 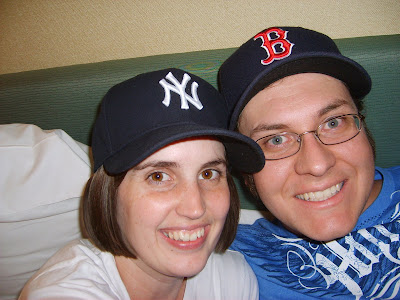 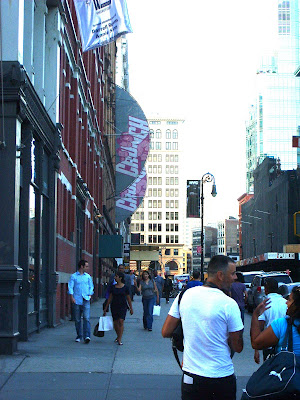 I may be the only person that watches a lot of "Will and Grace", but this is the gym, "Crunch", they work out in in the show. 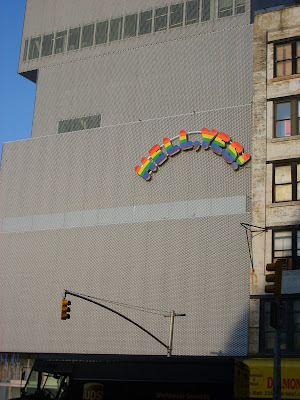 Then we walked over to NYU/Washington Square. It was nice, we took a sit in front of the fountain and people watched a little bit. 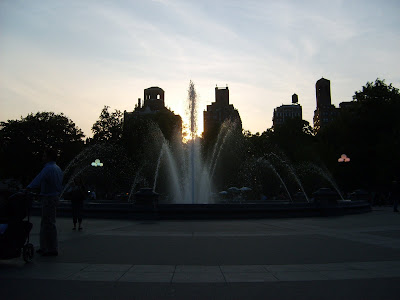 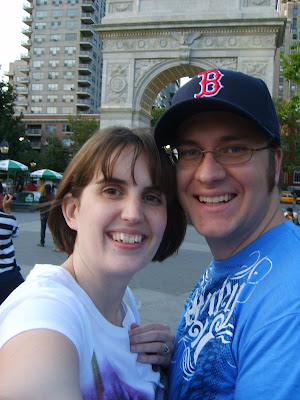 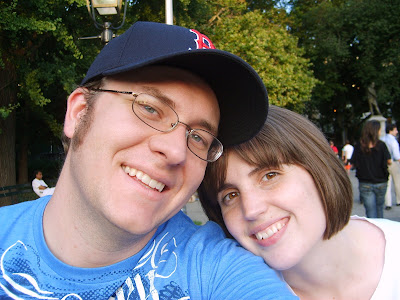 As we headed back to the hotel, we stopped at "The Strand", a new/used/rare bookstore that's like 6 stories. We only stayed on the bottom and browsed their film book section, which was HUGE! They had multiple rows of film books old and new. I almost bought one, but resisted. 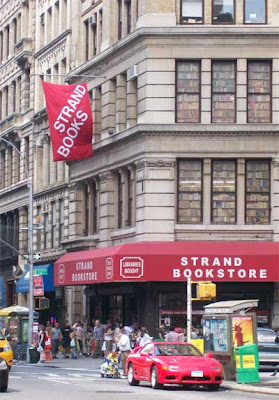 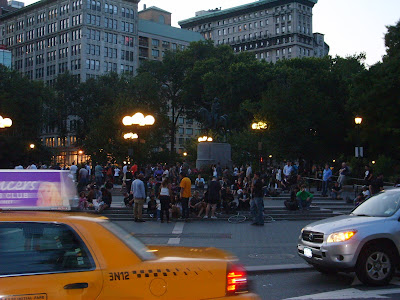 It was full of the skater teenagers.

Then called it a night.