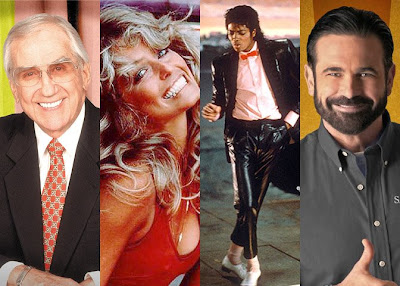 This is all very sad. All of these people have made their mark on pop culture and losing them feels a little uneasy for me. I watched Ed McMahon on "Star Search" every Sunday night when I was little. I listened to Michael Jackson's music for as long as I can remember, and I loved his videos up through high school. Farrah Fawcett hair! Billy May's cracks me up.
Who's gonna sell me stuff on TV now, and with such enthusiasm. Who's going to send me mail telling me I won a million dollars? Who's face is going to scare the crap out of me whenever he appears? What other "Charlie Angel" am I supposed to care about now? All the fun seems to be coming to an end.

After Michael Jackson died, and I have forgotten about Farrah Fawcett's death, along with the rest of the world, I felt we needed to honor his memory by watching "13 Going on 30", of course for the amazing Thriller scene. Brady had never seen the movie and said "no". I was a little saddened by this, however, I sweet talked him into it on Friday and Brady beheld the glory of the film and the Thriller scene. He enjoyed the movie.

Speaking of Brady and me. Here's what's been going on with us.
Our trip is just a week away and we're very excited. I only have 4 days of work (and school), an awesome day with my mom for her 50th birthday, and then we're off.
This Saturday, Brady went out with our friend Evan to shoot a commercial for a contest they're entering for Amazon.com. I wasn't able to go because of a dentist appointment, but the footage looked great. I'm excited to see how they do.
While Brady did that, and after the dentist, Sarah and I went shopping. I needed some decent clothes that fit me for New York. I've gained weight since getting married and 2/3 of my wardrobe doesn't fit so great. I blame the pill. I was able to find some cute stuff, I hope I don't grow out of this stuff too.
Saturday evening Brady and I went shopping for his new clothes too. Yeah, we've both gained weight. He was able to find some great stuff too. FYI: The store "Buckle" sucks! It used to have such good stuff, now it's as if the printing machines regurgitated onto the shirts. 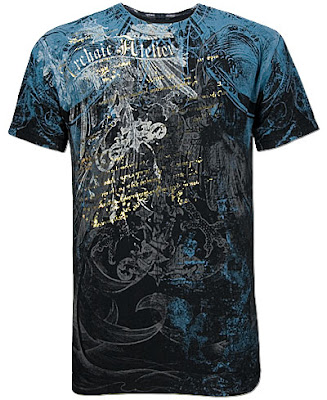 And it's so deceiving when you pick up a shirt and doesn't look to bad like this: 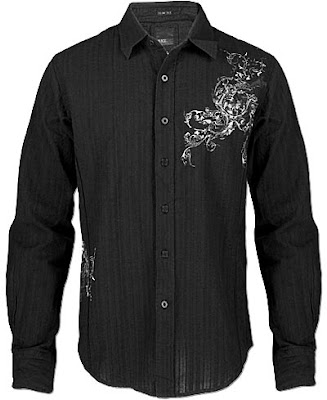 But this you turn to see the back of it and you get this: 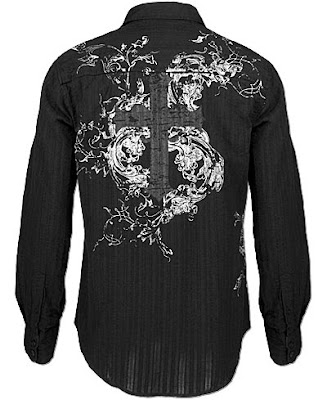 I will leave you with the "13 Going on 30" goodness of Thriller.