I don't remember the exact date we did this but I wanted to tell the story because it was a first for me. Brady's family is into motorcycles, dirt bikes, ATV's, stuff like that. And everyone knows that I am not a risk taking type of girl. However, Brady asked me if I wanted to go along with the fam to Glamis Sand Dunes. I immediately said yes, it sounded like fun and something different. So we (Brady's parents, Blake and Cindy, Brady's brother, Riley and his girlfriend Chelsea, and the two of us) got in the RV and set off on a Friday night. We slept once we got there and woke up in the morning for the fun to begin.
First we needed to gear up. 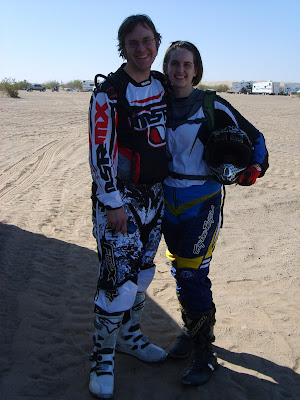 Here we are, all dressed up for the ride. Those boots are made of plastic making them fun to walk in. I couldn't bend my ankles at all. Everything we wear is for safety reasons.

Brady gave me a crash course on how to ride the ATV. I was mucho nervous since they had a clutch. Although I can drive a car with a clutch, ATV's are different and I always had a hard time switching gears.

We then rode off. I continued have problems switching gears but I eventually got the hang of it, kind of. 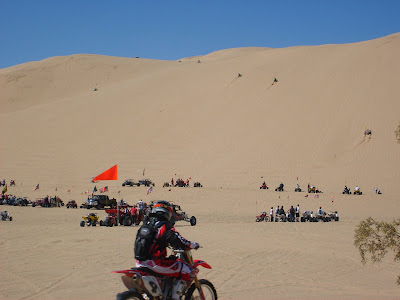 This, I believe, is "Oldsmobile Hill", we sat and watched people ride down. Only Riley, in the foreground here, went up. 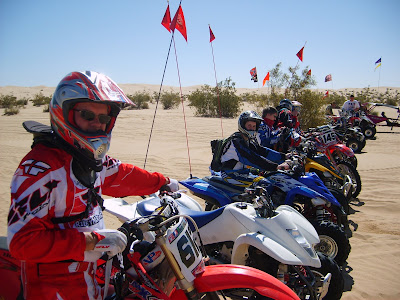 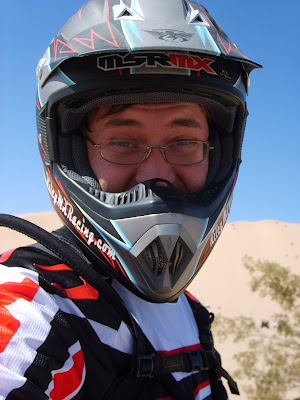 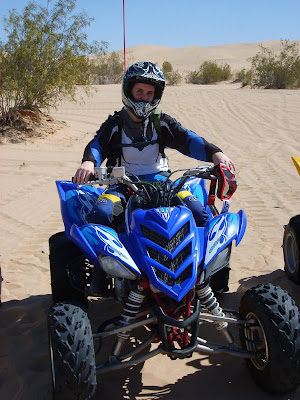 This is me giving the signal that "I'm ok".

We went off to a more deserted area with less people to just play around. I was feeling a bit more confident by this time and was going a little faster than I probably should have. I was going up and down small dunes and after coming off of one I hit a little lip of sand. It seriously must have been only 8 inches and I hit either to hard or too slow or I shouldn't have hit it at all, but I did hit it and my bike threw me off!
It all happened a little fast and I thought the bike may have flipped over me, but I've been told that it didn't flip. What I do know is that I hit my head pretty hard (thank goodness for helmets) and the bike drove across my leg, and then rolled backward back onto my leg!(thank goodness for hard plastic boots) I tried pushing the bike off, but it was too heavy, so I just laid on the ground waiting for help. Brady was there 2 seconds later and pushed it off of me. I was a little shaken, but I wasn't hurt except my head hurt a little, and I knew I was going to have a bruise on my leg the next day (and I did!). I don't have pictures of my crash but here is my helmet where you can see where my head bashed into the sand. 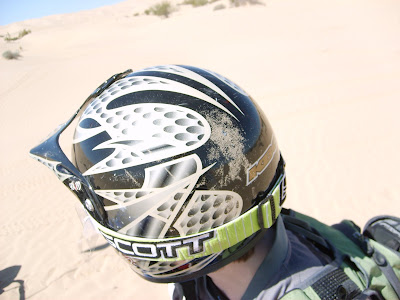 Well, I got back on and continued to ride, I was just more cautious again, going kind of slow. We started to ride back to the RV for some grub. Brady was leading the group, I was right behind him. Brady starts to go up a dune, and I of course followed, bad idea. The top of the dune was getting narrower and all of the sudden I felt my ATV tipping over! To avoid getting crushed again, I bailed off. On the ground. Again! I screamed and rolled on the ground saw my ATV drive itself down the dune and come to a stop, not tipped over.
I was now completely shaken, it took me forever to get started again. Everyone took off to the RV and Brady waited for me to get the nerve to come down a dune with a steep decline. After I finally got down we took a long trip back to the RV, we got lost, even though Brady had the GPS. We then ate grub and rested up. I got many high-fives for my crashes. BTW: I was the only one to crash the whole trip.
After we ate lunch we rode over the Glamis Beach Store to get some ice cream. The ride was mostly flat, so I was good. The store is super dusty ghetto and most of the souvenirs in the store have been sitting there for years. It was hilarious. 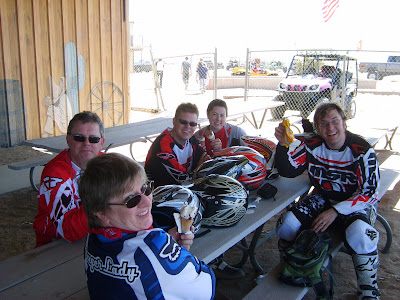 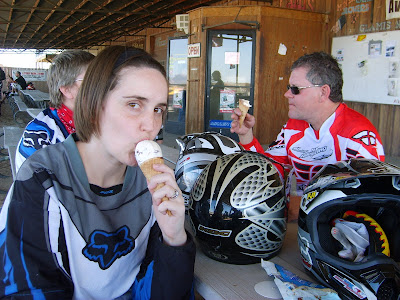 After the yummy ice cream, we headed back to the RV, packed up and drove home.
What a trip. I did actually have fun. 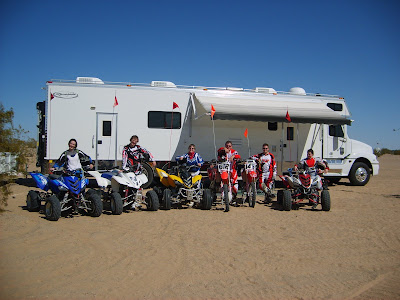 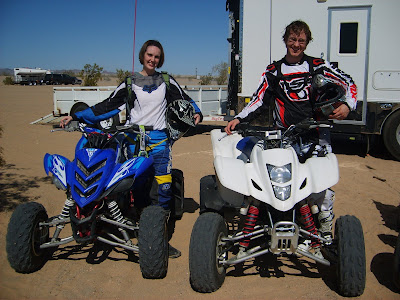