Past times: Flight of the Conchords concert 5/19/09

Since we want to update our blog with exciting stuff, we need to begin with things that happened a little while ago. On the 19th, we attended the Flight of the Conchords concert. If you have not seen the show on HBO, you can see it on DVD of just check out their music. They are a folk parody duo from New Zealand and we love them a whole lot. They are just plain hilarious. 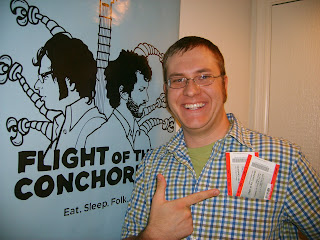 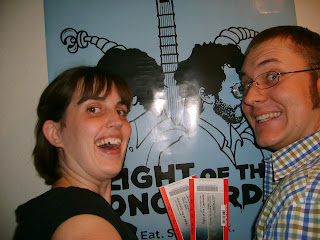 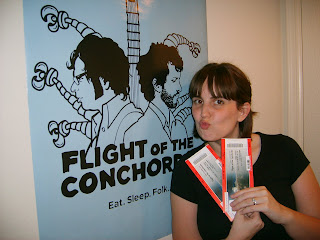 We started the night taking pictures, however, this is where the picture fun ended since the security people wouldn't let me in with my camera, and dumb me, didn't even have my purse to hide it. So Brady took it up to the 6th level of the car garage to put it in the car. I felt bad.

So we got in, found our seats, which weren't too bad considering most of the show was sold out by the time I knew the tickets were on sale. Hilarity ensued from the get go. Jemaine (one of the band members) comes on the speaker to announce the opening act Arj Barker, who plays Dave in the show. I was happy since I once dressed up as Dave for Halloween 2 years ago. 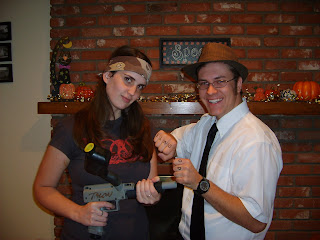 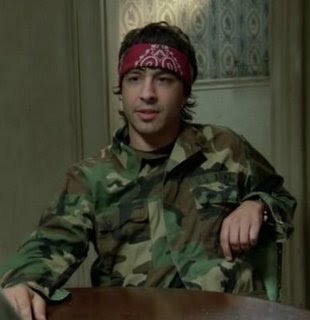 After Arj Barker's stand-up routine. Bret and Jemaine start their show. They come out wearing robot heads (you just have to know them to understand) and did a rousing opening number. Anyways, most of the show consists of them sitting on their stools bantering and singing awesomely hilarious music. 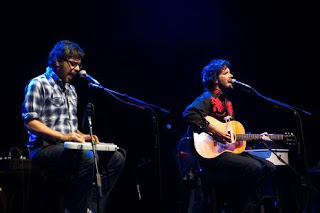 We had a one guy sitting behind us that enjoyed talking really loudly throughout the whole night. He even splashed his drink on us. He kept screaming out for "Leggy Blonde" one of the songs from Flight of the Conchords. We just rolled our eyes at this guy since the main singer of "Leggy Blonde" is the character Murray, from their show, and he wasn't there. Bret and Jemaine even needed to remind the audience that their show is not a documentary and Murray is not really their band manager.

The duo was great at playing off the audience. Someone yelled out "Free Bird" and these guys actually played it! It was so cool. However when they began breaking into a song from Prince, they stopped and said they weren't allowed to do cover songs. 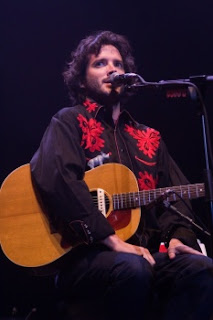 Here is a better picture of Bret and his amazing shirt he wore. All that red embroidery really glowed under the black light. I developed a big crush on him during the show. He would forget the lines to the songs every once and a while and just laugh. He has an adorable smile. But that's just me.

It was an awesome show, we laughed the whole time and still love these guys and will see them again when they come back (hoping they do). 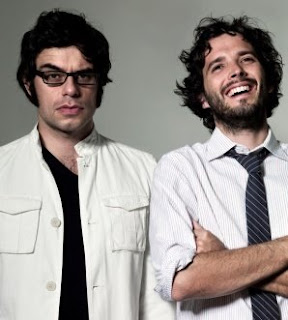 Jenny
The Most Beautiful Girl in the Room
Carol Brown
Hiphopopotamus vs. Rhymenoceros
Business Time

(I have a hard time choosing one)